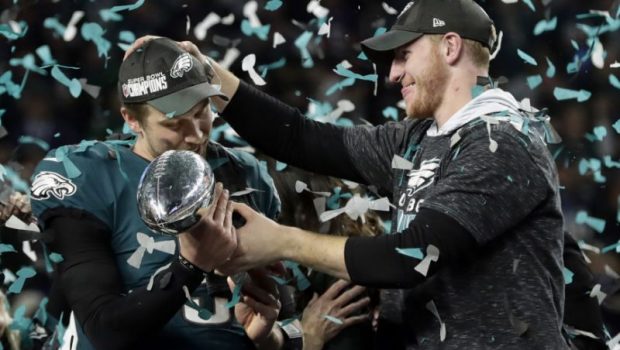 EAGLES CHOSE WENTZ OVER FOLES: LET’S SEE HOW THAT WORKS OUT!

The Eagles are getting lots of praise for their offseason with Vegas setting their over/under at 9 1/2 wins.

They chose to let back-up QB Nick Foles go and extended Carson Wentz as their QB of the present and future, but had the two QB’s been the same age, I’m not sure the word “right” would apply. Eagles fans have unquestionable love for Wentz, but he’s a guy that’s already proved to be somewhat injury prone in his young career, and he’s had what, 16 games of upper echelon QB play in this league.

His 2017 campaign was a phenomenal one before it got cut short by injury, and there is always going to be the caveat that 2018 was not going to be nearly as good because it does take time to come back from an injury like the one Wentz had. And it’s not like we haven’t seen QB’s in the NFC East have a great first year or two in the league before flaming out in a big way; RG III anyone. Wentz is a totally different signal caller then RG III and is definitely better, but I think we’ve got to hold off on anointing this guy as the next face of the league type guy at this position for a variety of reasons. His health is obviously one, as a repaired knee and back at just 26 years old is concerning, and with more film on him with each passing year, opposing coordinators can continue to come up with better ways to slow him down ala what happened to RG III after his first couple of years in Washington. Wentz still has the prototypical QB build to be a successful pocket passer in this league – something RG III does not – but the Eagles caught lightning in a bottle in 2017 from start to finish, and quite frankly they’ve been overrated ever since. To me they are decidedly the 2nd best team in this division, in 2019, and this is a year where we probably only see the division champion from the NFC East make it to January. Finishing the season with four straight divisional games – vs NYG, @ Washington, vs Dallas, @ NYG – could end up being a blessing or a curse for the Eagles playoff hopes, and I figure it’s more likely to be the latter. By then, the Giants and Redskins would love to play the spoiler role if they are already out of things as expected, and if they aren’t well then it’s more tough games late that Philly’s got to deal with. There is no safety net behind Wentz anymore with Foles now gone should he get hurt again, and they’ve just got the look of a team that needs everything to go right for them, every single week out there, just to get to 10 wins. At plus-money odds to bet against that happening, it’s easy to make this play.