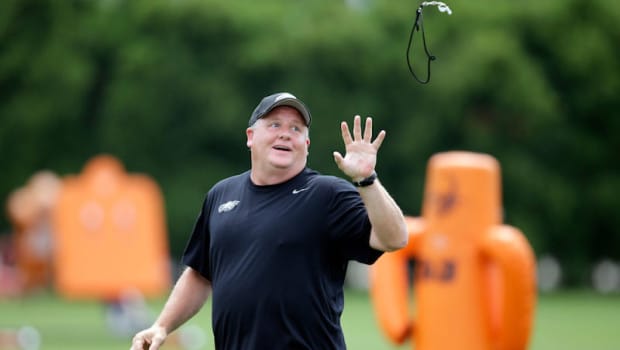 CHIPPER ON UP-TEMPO: TRYING TO GET GAME OVER QUICKER FOR FANS!

So, now the Atlanta media is dealing with the national phenomenon known as Eagles coach Chip Kelly.

Kelly’s going to get asked about tempo in practically every interview he accepts. It’s inevitable at this point.

During a chat with D. Orlando Ledbetter of the Atlanta Journal-Constitution, in advance of the Birds’ Monday night opener against the Falcons, the Eagles head coach used new reasons for why Philadelphia’s offense runs as quickly as it does: Chip’s doing it for Eagles Nation.

There are no “football reasons” for the up-tempo offense, according to Kelly:

Q: What is your theory behind the tempo attack and how best it should work?

A: We are just trying to get the game over quicker.

Q: But, anything football-wise? You know, other than getting the game over quicker.

A: That’s it. It’s all for the fans. We just want the game to get over quicker. People shouldn’t be paying a lot of money to watch guys stand around.

Q: No football reasons though?