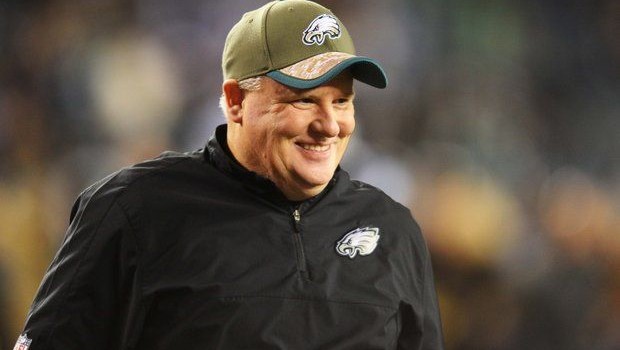 So, the other day Chip Kelly told the lame-ass local media that he’s not going anywhere, notwithstanding the totally fabricated meme that the media have concocted.

And yesterday, he doubled down with the Birds’ players.

“It was real,” Eagles receiver Jordan Matthews said. “It was transparent.”

Following the team’s loss, their third in a row, Kelly opened up to the players about the rumors he might leave at the end of the season, or even sooner, due to the fact the team was 4-7, and many feel don’t have enough talent to win.

“You can act like there isn’t an elephant in the room, but at the same time, everybody hears rumors, everybody hears speculation,” Matthews said. “You don’t have to read article, it could be your cousin sending you a text message or something. Coach Kelly said (after the loss), ‘Look, I know what people are saying, but I’m here for you guys, I wanna be here for for you and I want to make this work because I believe in you guys.'”

A loss against the Patriots next Sunday would drop the Eagles to 4-8, but in the subterranean NFC East, they might still be alive for the division title.

Still, it was clear that Kelly’s message to the Eagles was about more than just this season.

“Sometimes, when there are transactions like (what happened here), everybody presses the fast forward button,” Matthews said of the outside expectations. “And think that everything is supposed to (work out right away). But sometimes the best things take time.

“I remember the Panthers last year. They were in a similar situation last year. We beat them really bad, and they haven’t lost since,” Matthews said. “(Quarterback) Cam Newton used to get killed, but no nobody has anything bad to say about him, expect he dances too much. Greatness takes time. And the thing is, Coach Kelly said he is committed to us, and committed to the time it is going to take for this process to become successful, so don’t worry about the outside stuff. We have to be a tight-knit group, and that’s what we are going to do.”

Some in the lame-ass media have said Kelly might have lost the locker room, considering the poor results on the field and the rumors he might leave.

Matthews, however, says that perception couldn’t be further from the truth.

“(The media) is only there at the beginning of practice, but I’m there when practice or games gets hard, and I see the guys in the huddle like ‘hey, let’s go,'” Matthew said. “When guys like Jason Peters are saying ‘let’s get this game’, or Sam (Bradford) still being positive, when you have DeMarco Murray looking at me like ‘let’s get this one JMatt’, you know that these are the type of guys you do want on this team, and will be successful.”