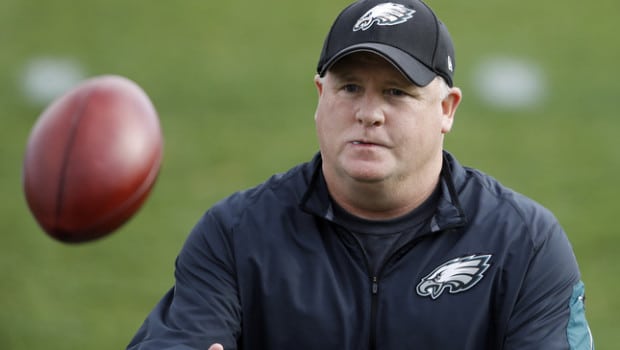 EAGLES’ COACH CHIP KELLY TRIED TO WIN WITH ‘DONKEYS’ IN 2015!

“I always put it this way, I don’t think there are many donkeys that have ever won a Kentucky Derby. You need studs. It’s really that simple,” Romanowski, who also played for the Broncos and Raiders , said during an interview during Super Bowl week in San Francisco.

“When you look at the teams that win, they win with studs. Great football players. Then when you are a great football coach, and you can utilize and put everyone of those players in a position to win, and utilize their talents to the best of their ability, that’s when you win.”

Kelly got rid of LeSean McCoy, DeSean Jackson, Jeremy Maclin and Evan Mathis. In their place, he brought in DeMarco Murray, Byron Maxwell and Sam Bradford.

“It would be hard,” Romanowski said when asked what his reaction would have been had he been on the Eagles. “When I was in San Francisco, I saw the 49ers get rid of Joe Montana, Ronnie Lott, Roger Craig, Tom Rathman. But a lot of times…when we got rid of Joe Montana, who took over? Another Hall-of-Fame quarterback in Steve Young who was younger and healthier.”

The Eagles finished 7-9, and Kelly was fired.

“I think what happened is…sometimes coaches think that it ends up being more about them then the players,” Romanowski said. “When you get rid of as many players as he did and replace them with guys that aren’t necessarily as good, or don’t fit the system, you soon realize that it’s hard. Players win.”

Now with the 49ers, Kelly will try to resurrect a coaching career that at one point seemed very promising.

Romanowski, however, didn’t sound very convinced it would happen.

“I personally would have rather seen Mike Shanahan get hired. I think he would have been better for the job. Personally, that’s my position,” Romanowski said. “But with that being said, I wish (Kelly) the absolute best.”