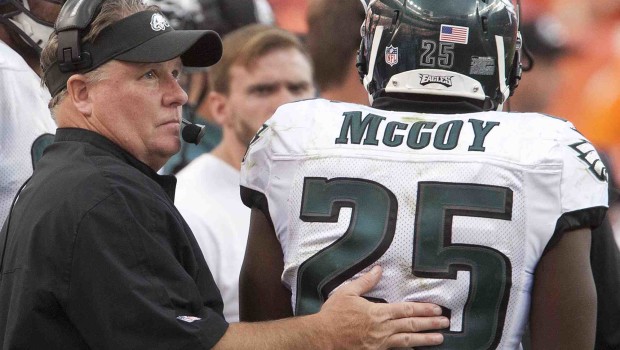 A method to the madness is the topic of the day, just 72 hours before the Eagles take the Linc field against the Buffalo Bills.

McCoy, whom Kelly traded last March, wants none of its.

So, what’s going on here?

So now the heat on this NFL beef is turned up again. Sunday’s game will eventually determine the outcome, but either Kelly thought bringing up a potential handshake with McCoy was a bit of gamesmanship that could help the Eagles or he naively fired up an already emotional player.

McCoy knows this much: the best way to get back at Kelly, to end this once and for all, isn’t to shake hands before the game but shake Eagles defenders during it. Buffalo is 6-6 and needs a win to stay in the wild-card race. Philly is 5-7 and needs a victory to stay in the battle for the NFC East title.

For all the ridiculousness that Shady McCoy involves himself in, he doesn’t shy away from playing angry. Getting caught up back in the middle of this probably isn’t brightening his week. He is certainly suspicious of Kelly’s motives in bringing this up. And let’s make one thing clear, for all the blowback McCoy will receive for not being polite and shaking a man’s hand, it’s Kelly who started (perhaps for this very reason) the drama by bringing up the handshake in the first place.

“He knows [we’re not shaking hands],” McCoy said. “That’s why he said it. I know him. He’s very intelligent. I can read between the lines.”

Maybe this throws McCoy off his game. Maybe it focuses him. Maybe it’s a bunch of nothing, just mid-week back-and-forth in a lengthy soap opera.

Like any self-respecting star player who has been traded away, McCoy wants a measure of revenge, even if he isn’t saying so specifically. Why wouldn’t he? The Eagles were his franchise. Then Kelly sent him packing for linebacker Kiko Alonso, who has 21 tackles in seven games of an injury-riddled season.

McCoy expressed his anger at the move immediately and then repeatedly. It mostly centered on what McCoy believed were Kelly’s controlling ways. That’s why, in McCoy’s thinking, Kelly got rid of “all the good players. Especially all the good black players. He got rid of them the fastest.”

It was a loaded comment to ESPN magazine. Kelly apparently brushed it off, forgave him and was willing to be, well, cordial. Still, as much as having someone imply racism in his decisions hurt, he was the trader, not the traded.

“I tried to call him after [the trade],” Kelly said. “And I talked to his agent after we traded him. I always wanted to talk to LeSean. Again, I have no issues with LeSean at all. He has a great personality, an infectious personality. I have tremendous respect for LeSean.”

McCoy made no time for him.

Adding some spice to the situation is that McCoy’s replacement in Philly, big-money free agent DeMarco Murray, hasn’t meshed in the offense (it’s better for a shifty gap runner such as McCoy). After leading the NFL in rushing a year ago, Murray has just 569 yards and five touchdowns (one receiving). He reportedly met recently with Eagles owner Jeffrey Lurie to discuss/complain about his role in the offense. He may be angrier with Kelly than even McCoy.

Meanwhile, McCoy, since getting healthy, has gone for more than 100 yards combined in rushing and receiving in his last six games. He’s been terrific for the Bills.

The trend lines here are obvious. Revenge and redemption are always fun. That’s what McCoy needs to be focused on, tearing it up during the game and not being distracted by whatever the heck this is with Kelly. Best to win the game, then see who’s willing to exchange pleasantries.

“[I have] nothing against [Kelly],” McCoy said. “I have no hatred, nothing negative to say about him.” Yet there is a limit to the relationship.

“He knows [a hand shake isn’t] going to happen,” McCoy said Wednesday. “You all know that’s not going to happen. He’s not shaking no hands. What are we shaking hands for?

“We’ve got nothing to shake hands for,” McCoy continued. “There are some dudes over there I’m going to shake their hands. And Lurie. I’m probably going to talk to Lurie for a little bit. A couple different coaches. A lot of players over there that I’m still tight with. I’m going to give [running back coach] Duce [Staley] a big hug. But yeah, that’s pretty much it.”

McCoy isn’t much for playing pretend. He thinks Kelly is playing games. The coach will look better in this silliness to some. Shady McCoy has never concerned himself with public sentiment.

Chip Kelly will be there too.