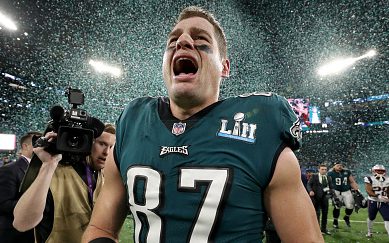 EAGLES CELEK THINKING ABOUT RETIREMENT: WE THOUGHT HE ALREADY HAD!

We thought he already had!

On 97.5 The Fanatic, Celek admits that he’s been thinking of retirement these days more than he used to shortly after he was released by the Eagles back in March:

“I think I’m leaning more toward retirement,” Celek said. “I’ve had a few offers, but none of them are worth leaving a city that I have been in for 11 years where I won the Super Bowl in my final year. It wouldn’t feel right to put another uniform on.”