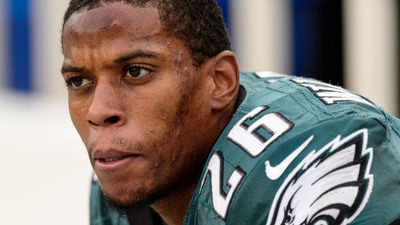 Leave it Eagles’ cornerback Cary Williams, who won a Super Bowl with the Baltimore Ravens two seasons ago, to put the 2014 Birds into perspective.

“We are resilient,” Williams said after the game. “We can come back.”

And now, after their 30-27 win over the Indianapolis Colts on Monday night, Williams said the Eagles are one more thing as well.

The Eagles defense came up big on Monday night, shutting the Colts out in the fourth quarter and forcing an Andrew Luck fourth-quarter interception that helped to keep the game within reach.

“We knew had to make some plays and force Andrew Luck to make mistakes,” Williams said, “because he hardly makes them.”

Luck’s big mistake came on a 3rd-and-9 play with just over five minutes to go in the fourth quarter. With the ball at the Eagles 22 yard line, safety Malcolm Jenkins stepped in and grabbed a Luck pass that was thrown right too him. Jenkins nearly took the ball the distance, as there was nothing but green grass in front of him, but was tripped up just as he caught the ball.

“I was hoping he was going to pitch it to me,” Williams joked. “That would have been cool.”

While Jenkins didn’t pitch the ball, he did give it back to the offense, who drove right down the field and tied the game with a 5 play, 76 yard drive in just 1:43. The interception and the touchdown gave the Eagles all of the momentum, and ultimatley, lead to rookie kicker Cody Parkey’s game-winning 36-yard field goal as time expired.

“It shows our tenacity, it shows our fearlessness, it shows our resilience — it shows our brotherhood,” Williams said of the comeback. “It shows how close knit we are and how we never fret in those situations. We always want to preform well under pressure and we were able to do that these last couple weeks.”

The Eagles may be proving they are a tight-knit, clutch team — but they are also making things difficult for themselves. Williams said he knows the team has not yet put together a complete game. Still, now at 2-0, Williams says he likes what he has seen from this current group of Eagles.

“There is not a deficit too big or too wide for use to comeback from,” Williams said. “We are going to play until the clock hits double-zero.”