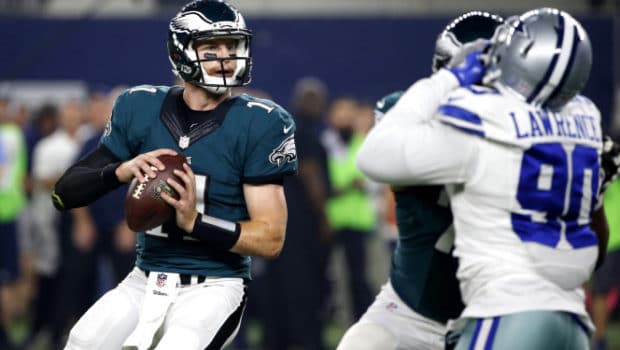 If you watched Carson Wentz the past three games, it’s not hard to guess what strategy the Giants will deploy against the rookie Eagles quarterback tomorrow at MetLife Stadium.

A state of confusion!

Cornerback Dominique Rodgers-Cromartie admitted as much yesterday, saying the Giants took note of how much success teams — particularly the Cowboys — have had recently against Wentz by dropping back in zone coverage and clogging the passing lanes.

And with just nine sacks in the first seven games, it’s not as if the Giants could count on rattling Wentz with pressure up front.

“He’s not making the average rookie mistakes that most guys make, but you definitely can disguise it a little bit and kinda get him off rhythm and bait him into throwing some [vulnerable] things,” Rodgers-Cromartie said.

Considering the high stakes — an NFC East game between teams tied for second place with 4-3 records — and how surprisingly well Wentz has played against the blitz, the Giants would be foolish to approach the No. 2 overall pick any other way.

That’s because Wentz has yet to show he can thrive against a crowded secondary.

After the North Dakota State product handled the blitz with surprising ease in the first four games, compiling a 103.5 passer rating with seven TD passes and just one interception, opposing defensive coordinators adjusted — and Wentz did not.

Washington got terrific pressure from its front four three weeks ago, sacking Wentz five times in a 27-20 Redskins victory, but he also struggled with their zone coverage while completing just 11 of 22 passes for 179 yards.

Minnesota followed suit the next week, barely blitzing at all and recording zero sacks, yet forcing three Wentz turnovers and limiting him to just 138 passing yards in a 21-10 Eagles win.

But just how much Wentz has been reduced to Captain Checkdown lately was on agonizing display last Sunday night in a 29-23 overtime loss on the road to the Cowboys.

Wentz completed 32 of 43 passes, but totaled just 202 yards though the air, which worked out to a pitiful, season-low average of just 4.7 yards per pass attempt.

That was in keeping with a recent trend in which Wentz either flat-out refuses to test opponents downfield or is being told to avoid that by coach Doug Pederson. As a result, the Eagles have just one pass play of longer than 30 yards the past four games — a span of 230 snaps.

“He’s a quick-rhythm guy with his throws, and when you drop people in the zones and cover up his reads, it makes it hard for any quarterback,” Rodgers-Cromartie said. “The main thing is to disguise and make him think a little bit.”

The Giants have even more reason to feel optimistic about keeping Wentz and the Eagles’ passing game in check Sunday with rookie cornerback Eli Apple expected back, which means Rodgers-Cromartie can return to the slot.

Then there is the not-so-small matter of Philly’s dismal receiving corps, which combined for six dropped passes against the Cowboys and managed to get even worse four days later when Josh Huff was released in the wake of marijuana and gun charges.

While Eagles No. 1 wideout Jordan Matthews has given the Giants trouble with three touchdown catches in four meetings, Matthews hasn’t had a 100-yard game since Week 1. The drop-plagued Nelson Agholor and project Dorial Green-Beckham don’t scare anyone, either.

The Birds do have a strong combination of tight ends in Brent Celek and Zach Ertz, though, and their two-headed running attack of Ryan Mathews and longtime Giants-killer Darren Sproles is capable of carrying Philadelphia if Wentz is kept under wraps.

The Giants appear to be hoping the ability to frustrate Wentz will be enough to end a stretch of recent Philly dominance that has seen the Eagles win seven of the past nine meetings.

“It’s a division game and a rivalry game,” Giants defensive end Jason Pierre-Paul said Friday. “This is what we live for — to play games like this.”