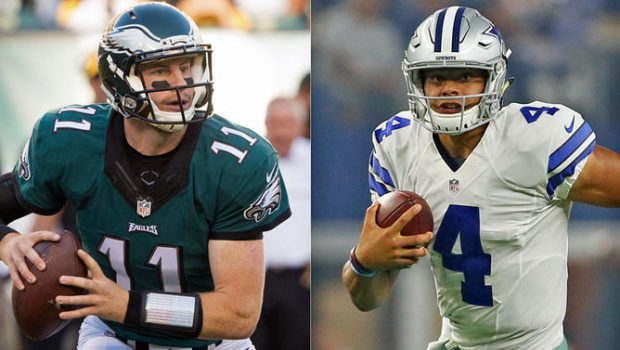 The NFL’s ratings are down for the first time in more than 50 years, and young people are cutting the cord and turning off.

But tonight’s Eagles-Cowboys game may change that narrative

The first game of what may be the greatest future quarterback rivalry since Tom Brady vs. Peyton Manning!

Prescott, regardless of when Tony Romo comes back, is the Cowboys quarterback of the future – and the present, too. The Eagles traded a bundle to move up in the draft to select Wentz at No. 2 overall, which is everything you need to know about his leading role.

So here we have it: The first matchup of what might be the NFL’s next big quarterback rivalry.

And for a bonus, the NFL gets a jolt.

Prescott and Wentz are not only pivotal to the playoff hopes of their respective teams – the Cowboys are 5-1, the Eagles are 4-2 — they are providing fresh star power that the NFL could really use about now in prime time.

With TV ratings for NFL games this season experiencing a double-digit percentage decline and numbers of the prime time games suffering an even more pronounced hit, the timing is perfect.

NBC thanks you, Dak and Carson.

Think they’re ready for the big stage and bright lights?

No sweat, given the way they’ve handled themselves so far in two pretty tough NFL markets. Prescott, a fourth-round pick from Mississippi State, has only played well enough that many people expect that Romo, recovering from back surgery, might not get his job back. Wentz plays in the City of Brotherly Love, with an intense fan base that can chew them up and spit them out with the best of them.

Yet the poise that the two rookies have demonstrated through their fast-track to higher expectations is a striking similarity that has earned them some serious locker room cred.

Just listen to Prescott, deflecting the dramatic subplot of the week.

“I really don’t measure myself to anybody,” he told reporters at the Cowboys headquarters. “Not any other rookie, not Peyton Manning, not Tony (Romo), not any of those. It’s all about how I can become better each and every day.”

This approach something to cherish about Prescott. He knows. The rest of us can do the comparing. He has his own job to handle.

Wentz, who assumed the starting gig after Sam Bradford was traded to the Minnesota Vikings is equally nonplussed.

“They know how to lead their teams,” Pederson said, alluding to the poise that extends to the football fields where Prescott thrown just one pick and Wentz just three picks. “Nothing seems to be too big for either one of them. They take it in stride, the ability to protect the football through these first six, seven games like this has been crucial.”

And just think: Two months ago, this loomed as a matchup featuring Romo vs. Bradford.

Of course, it’s not just about the quarterbacks. Complementary football is what all the coaches want. And to a large degree, that’s what they’re getting. The Eagles defense is allowing 14.7 points per game, and has 20 sacks, both marks the third-best in the league. Philadelphia has returned kickoffs for touchdowns in back-to-back games.

The Cowboys, with dazzling rookie NFL rushing leader Ezekiel Elliott behind the NFL’s best O-line, lead the NFL in time of possession (33:09), which takes much pressure off an overachieving defense.

Still, at some point a quarterback has to make a play to win.