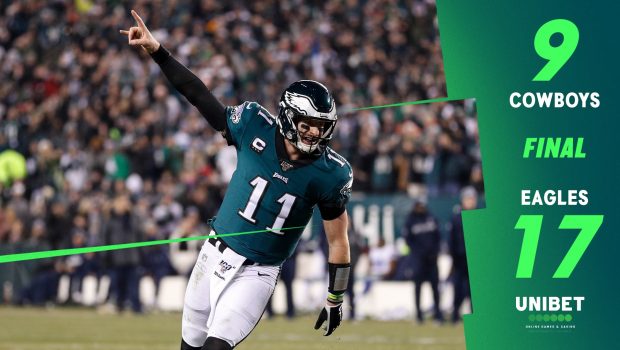 EAGLES CARSON WENTZ SHOWED WHAT A FRANCHISE QUARTERBACK IS!

Memo to all those in Eagles Nation who have been hating on quarterback Carson Wentz:

Wentz willed the Eagles yesterday at the Linc:

He completed 31 of 40 passes and also contributed 22 rushing yards on six attempts.

In short, he was Wentz was amazing.

“Resilient. Energetic. I think there’s been a lot of excitement with the unknown. I think with a lot of new faces and a lot of guys that maybe weren’t expected to be making these plays that unknown factor just is exciting,” Wentz said. “I think just the resiliency that I’ve seen, it’s been the next-man-up mentality from really the moment I got here in Philly. You see it over and over and it’s exciting to see these guys come to work with a sense of belief and the pride they take in their work to get it done out here on Sundays.”

Wentz didn’t turn the ball over, he made great decisions, and he threw the ball with confidence and precision.

The offense has rallied around Wentz as he’s lifted everyone around him. That’s what franchise quarterbacks do.

With Zach Ertz battling injured ribs suffered early in the game when he went up high for a Wentz throw, Dallas Goedert was the go-to weapon in the passing game. He was targeted 12 times and had nine receptions for 91 yards (both career highs) and a 6-yard score in the first quarter, a leaping grab over defenders in the back of the end zone. (below). On a big third-and-6 play in the fourth quarter, Goedert caught a 22-yard pass to move the sticks and, even though the drive stalled, the Eagles were able to eat a couple of valuable minutes off the clock.