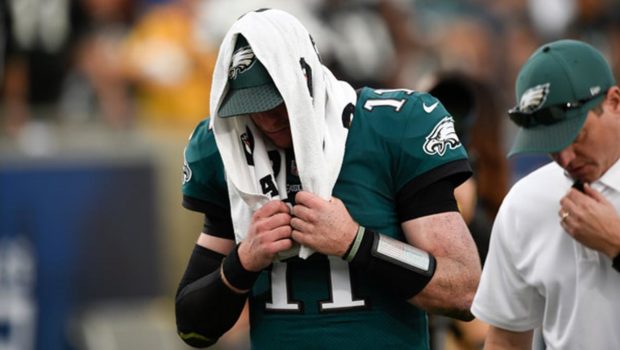 EAGLES’ CARSON WENTZ IS OUT FOR THE SEASON: WHY ARE THE NFL’S BEST PLAYERS FALLING LIKE FLIES?

So asks the Wall Street Journal:

Wentz joined one of the NFL’s most elite groups on Sunday. An ACL tear that ended his breakout season added him to a Pro Bowl-worthy squad with injuries that have sidelined them for the duration of 2017.

Injuries in the NFL aren’t necessarily up this year—it just seems that way because so many high-profile stars have gone down. And that has made the story of this NFL season more about the players on the sidelines than the ones on the field.

A team of the best injured players might be better than a team of all the players still standing. That sounds altogether preposterous until you look at the laundry list of names on injured reserve and realize that Wentz isn’t even the best injured quarterback. Or second best. Third, maybe.

The roster of injured players includes a collection who have claims to be the best at their positions in the entire sport. There’s Packers quarterback Aaron Rodgers, out since Week 6 with a broken collarbone; Cardinals running back David Johnson, out since Week 1 with a wrist injury; and Giants receiver Odell Beckham Jr., out since Week 5 with a fractured ankle.

Before the season, they might have been the first quarterback, running back and wide receiver taken in your fantasy football drafts.

And that’s only the beginning. Colts quarterback Andrew Luck has missed the entire season. J.J. Watt, the Texans lineman who is perhaps the best defensive player in the world, is done too. Two key cogs from Seattle’s famous Legion of Boom—cornerback Richard Sherman and safety Kam Chancellor—are in the same bucket.

It’s not just well-established stars, either. Injuries have also ravaged some of the game’s youngest and brightest stars, who gave the league some it’s most hopeful plotlines early in the season. Houston’s Deshaun Watson, the charismatic college phenom from Clemson, looked like one of the best rookie quarterbacks in ages until he went down with an ACL tear. Fellow rookie star and Vikings running back Dalvin Cook is done for the year too.

Now the injury to Wentz, who was reviving the Eagles franchise in his second NFL season, has swiped an MVP candidate and upended the playoff race. The team with the best record in the NFC may no longer be the best team in the NFC.