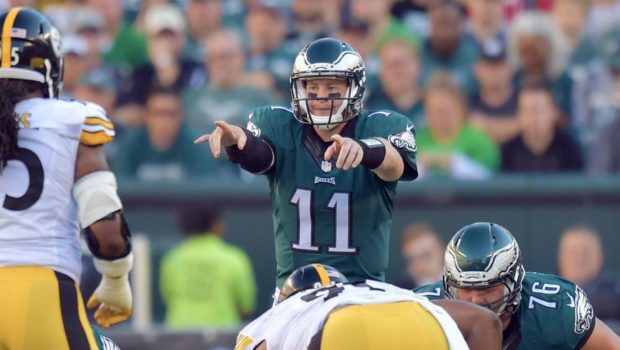 EAGLES’ CARSON WENTZ ‘PLAYED LIKE A FREAKIN’ HALL OF FAMER!’

Eagles rookie quarterback Carson Wentz is winning everyone over.

Whether it was the season opener against the Cleveland Browns, when he was given eight days’ notice that he’d be the starter; his first road test at Soldier Field the following week; or Sunday’s game against the Super Bowl-hopeful Pittsburgh Steelers, Wentz has met the moment with an equal level of calm and command, using precision and patience to casually steer past whatever ditch was supposed to swallow him up.

Yesterday’s game was his finest statistically; he completed 74 percent of his throws, eclipsed the 300-yard mark for the first time and tossed a pair of touchdowns.

“He played like a freakin’ Hall of Famer,” said Steelers defensive end Cameron Heyward, via ESPN’s Jeremy Fowler. “I don’t know how many passes he missed, but he managed the game, got the ball to his receivers, got the ball to the running backs. We just have to get a lot better.”