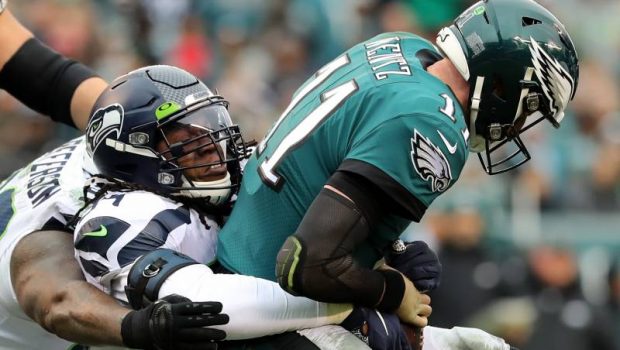 In the significantly playoff-crippling 17-9 loss to Seattle, Wentz played at times like he had a case of the yips.

They started early. Midway through the first quarter, on third-and-nine from the Seattle 10-yard line, Wentz had running back Miles Sanders alone in the left flat, just a few yards away, with an open path to the goal line. It was 50-50, at least, that he’d have turned this gimme completion into a touchdown. The ball, looking like it was forced by Wentz, sailed five feet over Sanders’ head. Startling mis-fire.

“It wasn’t the wind, it wasn’t the — it was nothing. I have to do better,” Wentz said about that and other misfires.

The recent spate of uncharacteristic inaccuracy and unsustainable drives caused the Eagle crowd to do what it traditionally does when it’s been let down: boo.

Wentz wasn’t crying about it afterward. “You never want to hear it, but it is what it is,” he said. “That’s this city, that’s the fan base.”

Four of Philly’s last five games are eminently winnable—at Miami, Giants, at Washington, at Giants—and the Eagles have to sweep those to have even a remote shot to make the playoffs.

But the Eagles aren’t going 4-1 or 5-0 down the stretch with Wentz playing like this, and Doug Pederson knows it.