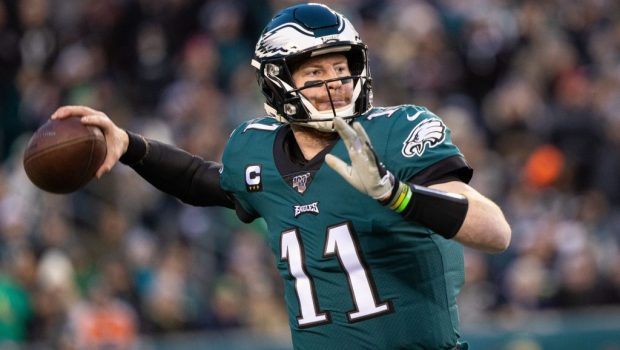 EAGLES CARSON WENTZ A 15-15 MEDIOCRITY: HOW LONG WILL HE LAST?

It was not supposed to be such a struggle for the 2020 Eagles to notch their first win of the season, but here they stand at 0-2-1, tying the Cincinnati Bengals 23-23 last Sunday — the latest indignity!

The most recent failure was highlighted by QB Carson Wentz unable to complete a routine throw to Miles Sanders streaking up the sideline, overthrowing Sanders by 10 yards for a sure TD!

Injuries are no excuse — other teams are winning with players out, so what’s up with Wentz?

It’s the $30 million dollar mystery, but when the Eagles drafted QB Jalen Hurts out of Oklahoma with the 53rd pick of last years draft, lots of eyebrows were raised. I bet Wentz also was puzzled.

The fact of the matter is Wentz’s win-loss record over the last 30 games is a pedestrian 15-15. It doesn’t look as if it’s going to get any better this year, so it could be the front office is not completely sold their franchise QB will get back to his 2017 form.

Either is a majority of the fan base.

Doug Pederson reiterated they are staying with Wentz, the high salary being paid is their fallback, for now.

Eagles travel to Santa Clara, Ca. Next Sunday to take on the 49ers who have lots of injuries problems of their own, October 4, 8:20pm/NBC.