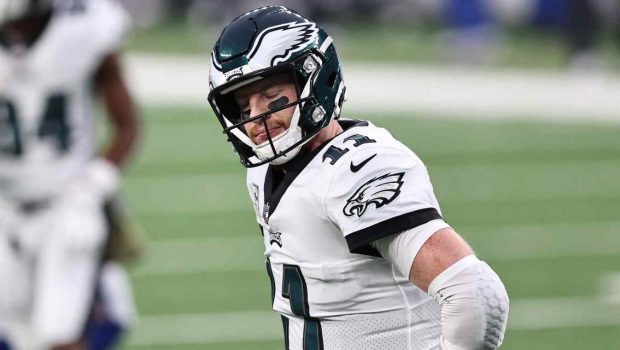 “Carson Wentz won’t take another snap for the Philadelphia Eagles ever again,” Orlovsky said yesterday on ESPN’s Get Up show.

“He can’t and he shouldn’t. This is going to be a divorce. It’s gonna be pricey and it’s gonna be an impactful one. I said last week, I don’t see—if Jalen Hurts continues to play good football—how you could have both of them on your football team next year. After yesterday, you can’t.

“Carson Wentz won’t take another snap for the Philadelphia Eagles ever again.”@danorlovsky7 sees a very pricey divorce in the Eagles’ future ? pic.twitter.com/SgLSk3jxWl

“I want everyone to understand, quarterbacks are very different,” he continued. “We’re different people. Like, when we walk out onto the field, that’s my football team. That’s my huddle. Those are my guys. Jalen Hurts ain’t giving that up. I just don’t see Jalen Hurts giving this up. And it doesn’t seem like Carson Wentz is able to get that, like to get that. This is a great opportunity for him to watch that off the field stuff that Jalen Hurts excels at and how he can learn from it, I just don’t think it will be in Philadelphia.”