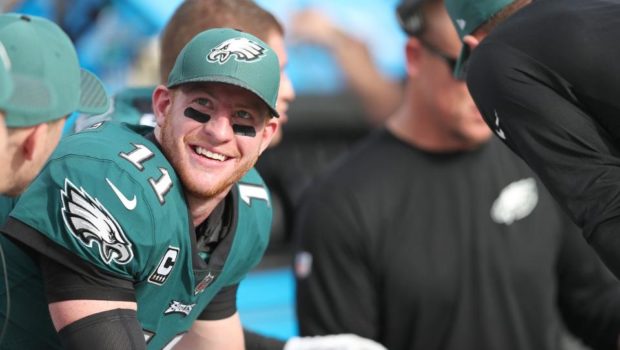 EAGLES’ CARSON WENTZ IS THE CHERRY ON TOP OF THE NFL’S STAR DISASTER LIST SUNDAY!

Wentz was everything this season was not. He was a young, healthy, budding superstar who looked like he was going to lead a complete team to a Super Bowl. He was likely injured while diving into the end zone in the third quarter. You could argue that his injury was emblematic of the season—potential excitement gets extinguished in a cloud of injury—but it wasn’t. What was emblematic of the 2017 season was the holding penalty that negated the touchdown—mistakes and injuries compounding each other. Nick Foles replaced him, the Eagles still won, and now three quarterbacks who were on Jeff Fisher’s Rams in summer 2016 are likely to be starting divisional playoff weekend.

There’s still the notion the 11-2 Eagles could make the Super Bowl with Foles. Tony Dungy even said it on Sunday Night Football. But that’s the heart of the problem: If Foles can get to the Super Bowl, that’s not a sign that the Eagles’ roster talent is good enough to overcome anything. (It is a good roster, though!) No, it’s a warning sign that the league has a serious shortage of superstars on relevant teams. The NFL built a $14 billion business on violence and this is the natural result. The athletes get bigger and faster, and they hit harder, and no safety measure can prevent the sport from being itself. NFL superstars get hurt because they are human and the open field of an NFL game is no place for humans.

I was at the Los Angeles Memorial Coliseum on Sunday. For most of the day, the stadium was in a celebratory mood. Eagles fans outnumbered Rams fans by a good deal. The game itself was an epic. These two teams could meet in the playoffs, and there was genuine excitement for the future—not just what might happen in January but what might happen for the next 10 years in the NFC between two talented teams with the nos. 1 and 2 overall picks from the 2016 draft.

And then Wentz dove for the end zone and left the game, and the rumors about an ACL tear soon turned into sourced reports.

There’s a sort of gloom in the tunnels of the Coliseum. It’s a 90-year-old building and certainly feels like it, and as the sun set, Eagles players walked out of a cramped locker room and into a dimly lit hallway, talking about how bummed they were. Doug Pederson, cutting off reporters who were asking about Wentz, instead said there was “jubilation” about clinching the division. I don’t mean to discredit Doug here, but I saw no jubilation. The hallway became a bit of a mob scene when Wentz emerged with a brace on to make himself a plate of food. There’s even some Zapruder-style footage of the quarterback going to the bus: