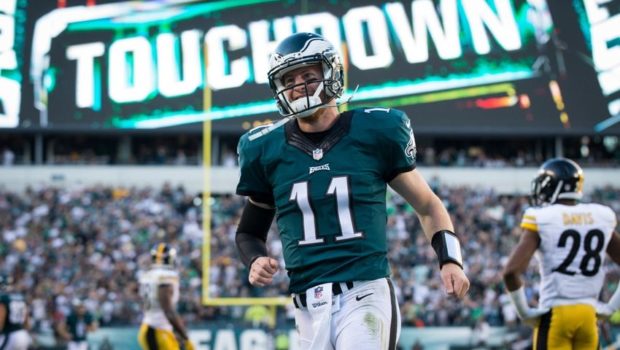 WHY EAGLES’ CARSON WENTZ WAS A BIG WINNER IN LOSS TO LIONS!

Carson Wentz was actually great yesterday. Coming off his first bye — which he used to prove that he can conquer man and beast alike — the rookie quarterback completed 25 of 33 passes and threw two touchdowns. He also threw his first career interception, and boy was it costly: Down 24–23, the Eagles had a chance to drive for the winning score with 1:30 remaining, but instead of keeping the Wentz Wagon rolling, the QB threw his first career interception.

This was actually a beautiful throw. It’s not Wentz’s fault that Darius Slay briefly held Nelson Agholor, then reached around the second-year wideout’s face to haul in the pick. In fairness, it’s also worth noting that even Wentz’s first real mistake allowed him to secure his place in the record books: