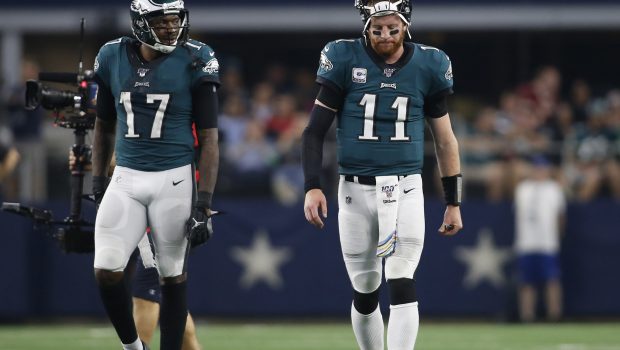 EAGLES CAN’T RUN, PASS OR TACKLE: WHEELS ARE COMING OFF!

It’s either one or two, yes,” Eagles coach Doug Pederson said when asked if last night’s smackdown by Dallas was the worst loss in his four years.

Pederson wasn’t alone in his view that the Eagles sucked last night.

The Cowboys had lost three consecutive games. First place in the NFC East was at stake. Pederson went deep into his book for motivation, with moves ranging from bold public comments interpreted as guaranteeing victory to releasing a starter. The message was sent. It wasn’t received.

So, the wheels are coming off the team many thought would compete for the 2020 Super Bowl.

Now they will have to rally just to make the playoffs.

“We came in here tonight and they fucking ran us out of the stadium,” veteran cornerback Orlando Scandrick said. “You have to tip your hat to them. They had the answers to the test tonight.”

“Shit, you are what you are. We’re a bad team right now,” Scandrick said. “We’re not playing good. We are what we put on the film. But just because you’re a bad team today doesn’t mean you’re going to be a bad team tomorrow. Everybody’s going to want to bury us. Rightfully so. We put some bad stuff on film tonight. Teams are probably licking their chops, ‘Can’t wait to play them.’ This team has been good for a long time. When you win a Super Bowl, make noise like they did last year, you’ve got a bull’s-eye. You’re going to get everybody’s best shot. …There’s not no secret. No scheme, no secret defense. It starts with just being better. Like, executing.”

“I just felt like we had a lot of confidence in the football team,” Pederson said. “A lot of trust, a lot of faith in the guys. We had a good week of preparation. Quite honestly, after a game like this, we all have to kind of step back and look in the mirror. Especially myself.”

There’s little offensive firepower without DeSean Jackson in the lineup.

When Lane Johnson was asked what’s missing, he said “there was no run game, no pass game.” That makes it a bit challenging to move the ball. The Eagles even benefited from Cowboys penalties on their first scoring drive. Otherwise, there was little offensive momentum.

“No rhythm. No consistency,” Johnson said. “When I was watching Dallas, you could just see the rhythm. I feel like that’s something we were missing.”

The Eagles have been plagued by slow starts all season. Pederson defied his convention and chose to accept the ball instead of deferring when he won the opening coin toss — just the second time he’s taken the ball in 33 coin flips the Eagles have won during the Pederson era. He said leading up to the game that it would behoove him to make the change to try to incite a quick start. Yet the Eagles turned the ball over on their first two drives, gifting the Cowboys 14 quick points. They’ve now trailed by at least 10 points in six of seven games this season.

“It sucks,” Wentz said. “It’s definitely something we’ve got to get fixed.”

“Ultimately, if the players here can’t do it … they will find somebody else,” Johnson said. “That’s always in the back of everybody’s mind. Moving forward it’s a kill-or-be-killed world.”

And then on defense, the Eagles cannot find ways off the field. They allowed the Cowboys to convert 8 of 14 third downs. The Eagles committed penalties that extended drives — another troubling trend — and remained vulnerable to big plays. Amari Cooper’s 44-yard catch was the eighth passing play of more than 40 yards the Eagles have allowed this season.

In past games, the defense could at least feel confident in how it stopped the run. Not on Sunday. Ezekiel Elliott rushed for 111 yards and the Cowboys totaled 189 rushing yards and 5.3 yards per carry. They attacked the Eagles linebackers, which shouldn’t have been a surprise. The Eagles cut Brown and played without injured starter Nigel Bradham, leaving the defense without its top two linebackers from the first six games. And the three top linebackers on Sunday (Nate Gerry, Kamu Grugier-Hill and T.J. Edwards) formed an undistinguished, unproven group that represented the Eagles’ organizational neglect at the position. Those were the linebackers Sunday because of a series of front-office decisions that included not prioritizing the position in the draft and seeking Band-Aids in free agency. The Cowboys took advantage.