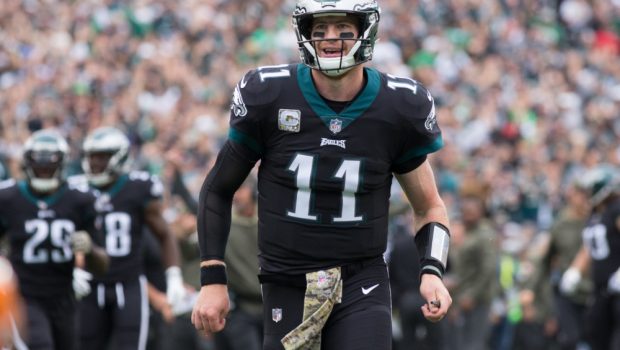 So says Brian Baldinger on FootballStories.com:

On December 10, 2017 Carson Wentz tossed his 33rd TD pass of the season to Alshon Jeffrey to take the lead over the LA Rams in the LA Colosseum.

Unbeknownst to most people watching that day, he tossed the Eagles record-setting TD passes on a torn ACL injured four plays prior to that throw.

Equally unknown to most was the severity of the damage.

On December 13 Wentz had the Steelers team doctor, Dr. James Bradley, do extensive surgery to repair his torn left ACL, a partially torn IT band, and to clean up some meniscus damage.

In other words the damage suffered by Carson that day was worse than initially diagnosed.

It is unheard of to do this type of surgery only three days after the injury suffered. Normally there is at least a week that would go by so that the swelling caused by the injury has time to recede.

But Carson pushed to have it done ASAP to give him as much recovery time to prepare for the start of the 2018 season. It is commendable on his part and not surprising as well.

The timetable on recovery was set at 9-12 months by Dr. Bradley. Conservative is the smart way to go when you are dealing with a young franchise quarterback coming off a MVP season. Just shy of starting completing a 13-game schedule he left No. 1 in the following categories: TD percentage (7.5), yards/completion (13.5), total QBR (74.4) and 4th in QB rating (101.9).

When training camp starts on July 25, Carson will have had 7 1/2 months of grueling recovery time, well short of the 9-12 months given to make the full recovery.

When the Eagles open up the 2018 season on September 6, it will be right at nine months of post operation. There is no need to push this time-line to get him on the field knowing his value to this team.

I think Carson understands this as much as he wants to lead the team onto the field at Lincoln Financial Field on that Thursday night September 6: