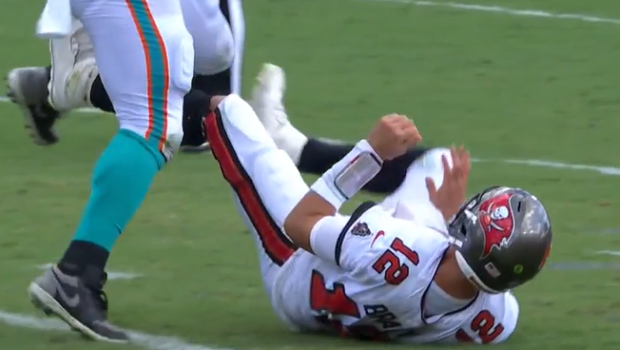 The injured thumb is not expected to keep Brady out of Thursday night’s matchup with the Eagles:

“I mean, look, a quarterback’s right hand is important at the end of the day. It’s not like it’s your left hand,” Brady said in his press conference.

“If it was my left hand, I wouldn’t even think two seconds about it. But the fact that it’s your throwing hand, there’s not many things that are that important to a quarterback other than probably your right shoulder, right elbow, and your right hand. So anytime you get banged on one of those, it could be an issue. But like I said, there’s no serious injury at all. It’s just more discomfort, but I think that should be gone here in the next day or two.”

Brady injured the thumb during the second quarter of Sunday’s victory over the Dolphins but still passed for 411 yards with five touchdowns.

Tom Brady’s hand is wrapped pretty good. He injured it in the first half in the #Buccaneers 45-17 win over the #Dolphins. Finished off his first career 400-yard, 5-TD game strong. pic.twitter.com/L5gnpn3KMz