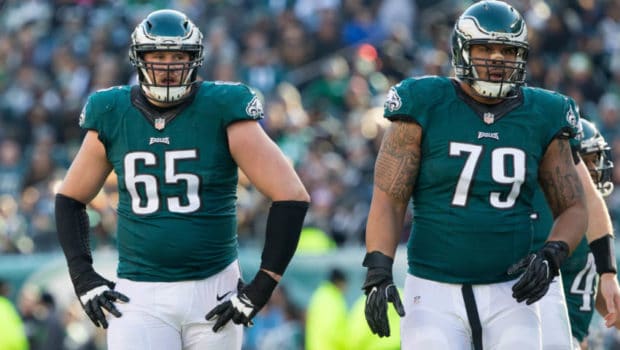 Brooks tore his Achilles at the tail end of the 2018 season — in January 2019, to be exact — so playing to even a respectable level this year would have been an achievement. Instead, Brooks went ahead and had the best season of his career and was the best offensive lineman in football fresh off the back of an injury that almost invariably affects performance in the first year a player returns from it. Brooks surrendered just one sack and 19 total pressures all season, and he earned the best run-blocking grade in the NFL among guards. He won PFF’s Bruce Matthews Award as the league’s best lineman and continued to get even better, despite being one the most underrated players in the league.

At his best, and when healthy, Lane Johnson is one of a few right tackles who can make a case to be seen as the best in the league. When he went out of the lineup, there was a noticeable drop in play despite his backup, Halapoulivaati Vaitai, actually performing reasonably well. Johnson had the best run-blocking grade (92.6) of any tackle in football this season, and he allowed only one sack across 454 pass-blocking snaps. Injury limited him to just 12 games, however, and that’s what keeps him from being among the very best players on this list, because in pure grading terms, this was the best season of his career.