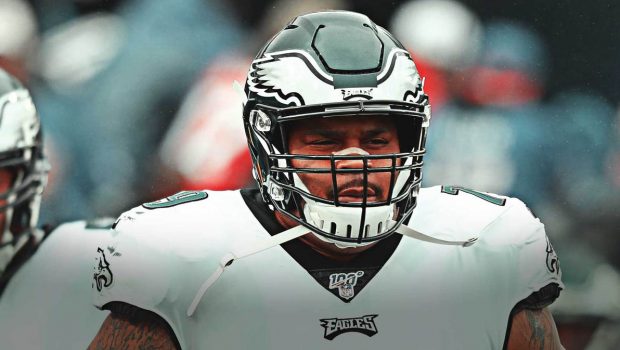 EAGLES BRANDON BROOKS IS F-BOMB CERTAIN: I’LL BE BACK!

Despite his season-ending Achilles injury, 30-year-old Brandon Brooks has vowed to make a comeback and recovery from the injury:

“When you’ve walked on the dark side so many times, your eyes adjust and you see light when there’s no light. It’s to the point now when I take that lonely walk through hell, I see the devil himself and let him know: ‘I’m back to tear this mfer up once again.’ And for him to say, ‘F—, not this mfer again.’ I welcome s— like this, so I bring it like others want to, what others can’t.”

Brooks, a third-round selection of the 2012 NFL Draft out of Miami of Ohio, with the Houston Texans, spending four years in Texas, three of which as a full-time starter. Brooks had his breakout with the Eagles in 2016, however, signing a $40 million deal for five years that offseason.

Since the right guard signed the lucrative deal, Brooks went on to win a Super Bowl with the Eagles — the first in franchise history — and reach three consecutive Pro Bowls. In spite of Brooks’ earlier Achilles tear, he ended up playing and starting in every game for the NFC East franchise in 2019, earning another Pro Bowl selection, too.

Brooks is in the final year of his five-year contract with the Eagles, so his future with the franchise beyond 2020 is unknown. But the veteran’s spirit is unshaken by the latest injury setback.