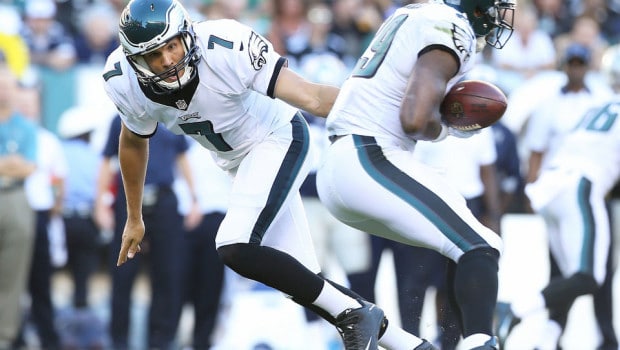 EAGLES’ BRADFORD: LOOKING LIKE A FANTASY BUST WITH 8 POINTS!

If you loaded up on Eagles quarterback Sam Bradford in your fantasy draft, you’ve got to be pissed off.

He struggled in last Monday night at Atlanta, but he was miserable yesterday against Dallas with just eight fantasy points, including a late fourth-quarter touchdown to save his total.

Bradford isn’t getting help from his receivers as one of his two interceptions came off the hands of Zach Ertz, but he has to play better. He completed just 23-of-37 passes for 224 yards, one touchdown and two interceptions with a lost fumble, and he’ll be tough to trust in next Sunday at the Jets.