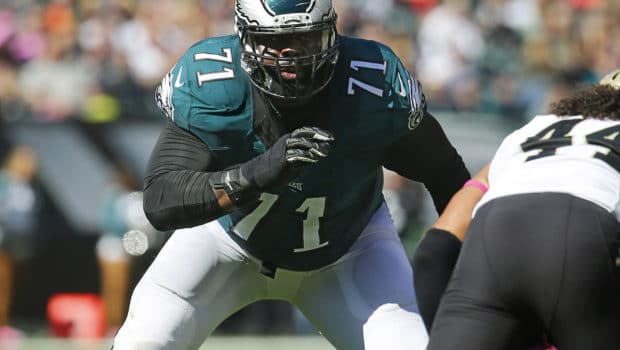 EAGLES’ BOY GENIUS ROSEMAN MAY HAVE TO CUT PETERS AND BARWIN!

Eagles big boss Howie Roseman was celebrated last offseason for the way he locked up so many players with big-bucks contracts.

There are so many holes on this team and so little available money under the cap that Roseman is looking like a fool.

With very few players actually hitting the end of their contracts this offseason, some creative decision making will be needed for Philly to make a splash in free agency.

While almost all the players hitting free agency will not return to next season, some other players that are still under contract could be joining them.

Freeing up some cap space, several players could either find themselves leaving Philly or getting a re-worked contract this offseason.

The leading name among these players will be Eagles’ legendary offensive tackle Jason Peters (above).

Having a healthy campaign for the first time in many years, Peters was the anchor on the Eagles offensive line. Once Lane Johnson was forced out due to his PED

suspension, Peters became the leader amongst the line. However, Peters is 34-years old and will be due $11.2 million next season, a massive amount for a player his age.

Unless Peters accepts a re-worked deal that lightens his salary cap hit for this team, the Eagles cutting him to save cap room — $9.2 million!

Also on the list of potential offseason cuts is defensive end Connor Barwin. Due around $8.4 million next season, Barwin proved this year that he is not worth that amount. Cutting him would save the team close to $8 million. Why should Barwin be cut? Playing in all 16-games this season, Barwin had his worst campaign since 2010, which was his rookie year.

Joining this list of names during the offseason on the definite cutting block will be Mychal Kendricks, Jason Kelce, Ryan Mathews, Darren Sproles, and Dorial Green-Beckham. All are, for one reason or another, players that could have played their last snap as an Eagle.

One player that does present an interesting case is receiver Nelson Agholor. While the team would undoubtedly like to cut their bust of a wide receiver, simply moving him would result in a higher cap hit that simply keeping him on the roster. Unless the Eagles simply don’t want Agholor on the team, it is almost certain that he will remain in Philadelphia through next season.