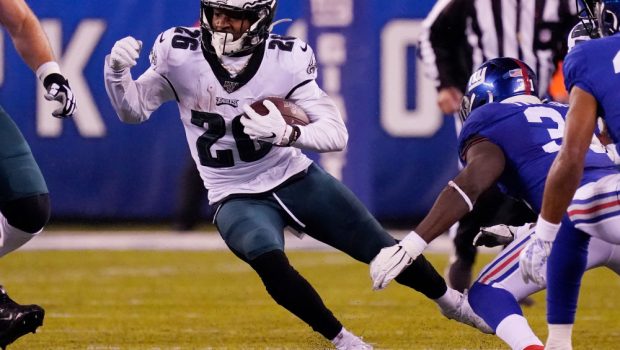 EAGLES BOOBIE MILES SANDERS IS BACK! HOW MANY SNAPS TODAY?

Eagles running back Miles Sanders has being activated off injured reserve after missing the previous three games with an ankle injury.

ESPN is reporting he is expected to play against the New Orleans Saints today.

Sanders practiced all week and is expected to reassume his role as the Birds lead back.

“If Miles is healthy and ready to go, he’s our starter,” coach Nick Sirianni said Wednesday.

Jordan Howard, Boston Scott and Kenny Gainwell proved to be an effective trio in Sanders’ absence:

91 carries for 427 yards over the past three games.

Howard has been a big part of that, racking up 211 yards and three touchdowns on 41 carries (5.1 YPC) over that span. He spent the early part of the year on the practice squad, but figures to be part of the rotation moving forward even with Sanders back in the fold.

One thought on “EAGLES BOOBIE MILES SANDERS IS BACK! HOW MANY SNAPS TODAY?”