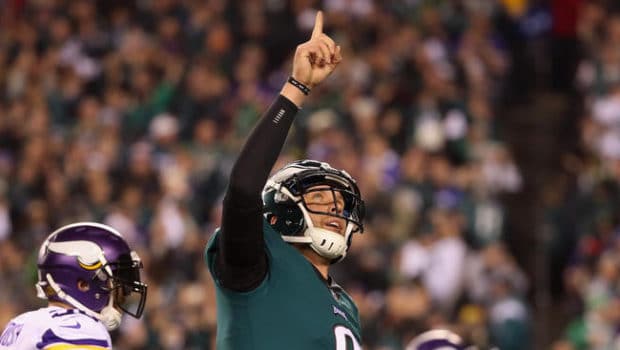 Nick Foles and the Eagles channeled the energy from a packed Linc to light up Minnesota’s vaunted secondary in a 38-7 victory in the NFC Championship game.

Foles’s huge performance ended the Vikings’ season and catapulted the Eagles to Super Bowl LII, where they will face the daunting task of taking on Tom Brady and the New England Patriots.

Foles, who had looked like a potential franchise quarterback in a stint as the starter in 2013, was thrust back into a starting role following Carson Wentz’s devastating knee injury in Week 13.

He had struggled to move the ball, with his play taking the team from Super Bowl favorite to consistent underdog. But against the Vikings the 28-year-old Foles was back to looking like the star some thought he would become. He completed 26 of 33 passes for 352 yards and 3 touchdowns. He was 10 of 11 on third-down passes, completed four passes of 35 or more yards, and turned what had been Philadelphia’s greatest weakness — its ability to generate big plays — into its biggest strength.

In an on-field interview with Fox after the game, Foles struggled to sum up his emotions, describing himself as “speechless.”

“In this moment it’s unbelievable, he said. “It’s humbling.”

Alshon Jeffery had a huge day with 5 catches for 85 yards and 2 touchdowns, but Philadelphia also got huge games from Zach Ertz (8 catches for 93 yards) and Torrey Smith (5 catches for 69 yards and 1 touchdown). The running game was quiet for much of the game, combining for 112 yards, but LeGarrette Blount contributed an explosive 11-yard touchdown run in which he simply ran through Minnesota’s defensive line.

The Eagles’ defense, which had been stout all season, proved up to the talk of living up to Foles’ big day, limiting Minnesota to 333 yards while forcing three turnovers.

The Vikings scored on their opening drive, undoubtedly allowing fans to dream of the possibility of Minnesota being the first team to play a Super Bowl at home, but a pick-six by Case Keenum on the Vikings’ second offensive possession set the tone for how the game would play out.

Keenum, who has a tenuous hold at best on the starting quarterback position in Minnesota, completed 28 of 48 passes for 271 yards and one touchdown, with much of that yardage coming once the game was well out of hand. He also accounted for all three of his team’s turnovers by way of two interceptions and a fumble on a strip-sack.

The Eagles have taken great pride in being underdogs in both of their playoff games despite being the top-seeded team in the N.F.C., and they are sure to continue that trend when facing Brady and the Patriots.