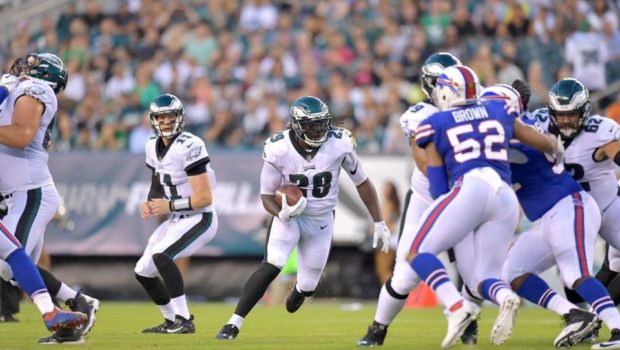 EAGLES’ BLOUNT HAS LOOKED OLD AND SLOW: HE’S NOT WORRIED!

Through the Eagles’ first two exo games, running back LeGarrette Blount has looked old and slow.

There’s no getting around those facts.

Blount carried the ball five times for just 18 yards while losing a fumble during the Eagles’ 20-16 win over the Buffalo Bills on Thursday night.

Throughout his NFL career, Blount has averaged just 3.6 yards per carry during the preseason while tallying 4.4 during the regular season.

“You go back and look at my preseason performance and then go look at my regular-season performances, and you tell me,” Blount responded to the Inky when asked about whether or not he was concerned about his lackluster preseason output. “There’s nothing that we’re doubting or that we feel like we’re lacking. I feel like we got all the pieces we need to be a good running team.”

“Obviously, you want to be productive. Whether you go in there for one play, and it’s a run, and it’s on the 20, you want to break it for 80 yards. …. You’re not going to get a lot of plays like that,” said Blount. “But hopefully over the course of a four-quarter, 60-minute football game, you get teams that wear out, teams that get tired. And then usually that’s when you see the big runs come. We haven’t been playing long enough in the game for that to happen.”