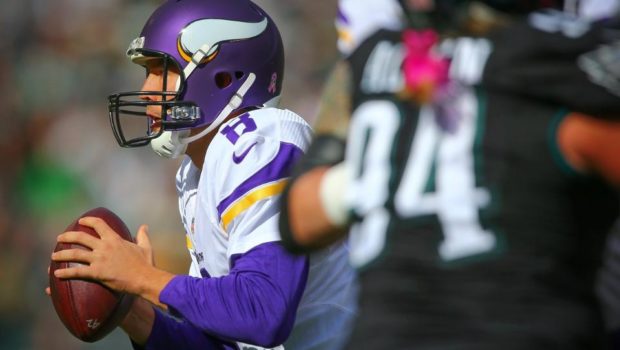 The Eagles rebounded from two losses that should have been wins and battered ex-Eagle QB Sam Bradford like a rag doll in beating the Minnesota Vikings 21-10 today at the Linc.

Josh Huff returned a kickoff 98 yards for a touchdown, Carson Wentz outplayed Bradford and the Eagles handed the Vikings their first loss of the season.

Bradford returned for the first time since his trade to Minnesota eight days before the season opener paved the way for Wentz to start. Bradford was 7-7 in his only season with the Eagles and won his first four starts for the Vikings.

But the Eagles pressured and harassed their former quarterback all game, sacked him six times, and forced his first three turnovers this season.

Wentz also struggled early, tossing two interceptions. But he recovered to lead the Eagles on a couple of scoring drives, including a 5-yard TD pass to Dorial Green-Beckham in the third quarter for an 18-3 lead.

The teams traded giveaways on five consecutive series in the first quarter and totaled eight turnovers. The Vikings started two straight drives inside the red zone, but squandered both chances.

Blair Walsh hit a 48-yard field goal to give the Vikings a 3-0 lead before Huff broke loose for his second career touchdown return. Huff sprinted up the right side, ran through Walsh’s attempted arm tackle at the 40, raced untouched to the end zone and capped it with a somersault. Wentz ran in from the 1 for the 2-point conversion to give the Eagles an 8-3 lead.

The Vikings had the ball at the Eagles 2 after Andrew Sendejo intercepted Wentz’s pass and returned it 16 yards. But Bradford tossed his first pick when Rodney McLeod caught a lofted pass in the end zone.

The Eagles gave it right back when Darren Sproles fumbled Wentz’s handoff. But on the first play from their own 17, Connor Barwin stripped Bradford and Malcolm Jenkins recovered. Jenkins returned it 76 yards for a score, but he was ruled down by contact after a video review.

Wentz threw another interception on the next series, a diving play by Xavier Rhodes. But Minnesota’s offense didn’t do anything again.

Down 18-3, the Vikings couldn’t get a yard on third and fourth down from the Eagles 6 early in the fourth quarter.

The Eagles have returned kickoffs for touchdowns in consecutive games for the first time in team history. Wendell Smallwood returned one 86 yards for a TD in last week’s 27-20 loss at Washington. Huff had a 107-yard TD return as a rookie in 2014.