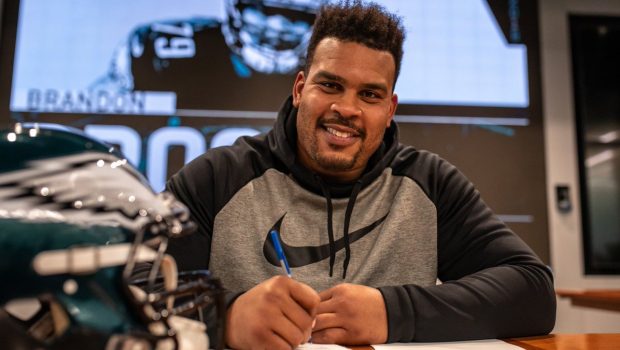 The initial diagnoses was illness.

It seems to be much worse. According to the Inky’s Jeff McLane, it is possibly the recurrence of Brooks’ ongoing battle with anxiety. The Eagles starting right guard left in the first quarter and never returned.

Halapoulivaati Vaitai took his spot before switching to right tackle and giving way to Matt Pryor. Vaitai took over for rookie Andre Dillard who was benched late in the first half.

Brooks has a well-documented case of anxiety problems dating back to his rookie season in Houston. In 2016, he missed two games for the Eagles after suffering panic attacks before warmups. It’s an issue Brooks has openly discussed and seemed to have overcome.

After the game, Eagles coach Doug Pederson told reporters he hadn’t talked to the team doctors yet.

“He just got sick and just had an illness,” Pederson said, “and we had to make a sudden change.”

Then, a sourced report surfaced citing anxiety as the reason. Brooks wasn’t available in the locker room to confirm the report.

Brandon Brooks received a contract extension that will make him the league’s highest-paid right guard.

Brooks, arguably the best right guard in football, agreed to a four-year deal worth $54 million, including $30 million in guaranteed money. The 30-year-old was on his way to winning the NFL’s Comeback Player of the Year after recovering from a torn Achilles in only nine months.