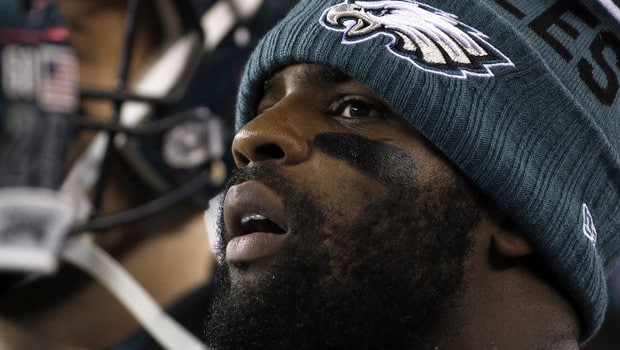 The last we saw of DeMarco Murray, the Eagles’ big bucks bust of a running back, he was breaking off a 52-yard touchdown run against the New York Giants in the Eagles’ last game on Jan. 3.

That was five days after Chip Kelly was shown the door as coach and Supreme Leader by owner Jeff Lurie.

Since then, there has been nothing but radio silence.

Even with Kelly gone and the hire of Doug Pederson, the former NFL rushing leader and the Birds’ relationship is on the rocks.

Eagles and Murray appear headed toward a stare-down regarding his future with the organization, according to an NFL.com report based on several sources informed of the situation. The division boils down to: Murray’s unsuccessful 2015 campaign during which he rushed for only 702 yards, the Eagles’ lack of conviction that he’s the right back and the massive contract Murray signed last offseason.

There are very real questions of, can Murray play and succeed in Philly in 2016? And moving forward, is a sudden turnaround feasible? There are doubts.

Remnants of the old regime have headed out the door, including Kelly and VP of player personnel Ed Marynowitz. Yet Murray, the poster child for the failed efforts during the 2015 offseason remains with four years left on his five-year, $40-milion deal that includes $9 million more guaranteed. A pre-June 1 cut would hand the Eagles a $13-million salary-cap charge — a non-starter for the team.

He rushed for a career-low 3.6-yards-per-carry, while his most memorable moment came when he informed owner Lurie on a team plane that the team lacked confidence in Kelly.

Murray hasn’t asked to be released or traded, and the Eagles seem — at this point — intent on not cutting him. But the longer this situation goes without a resolution toward the belief that it can work, the greater chance it could explode.

It’s fair to say Murray has eyes on places where he believes he can be successful and earn the large contract he signed. If he was released, teams like the Seahawks, Cowboys and Raiders (who were interested last offseason) would be interested again. He’s currently building a house in Dallas.

It’s unclear how much interest there would be in a trade — and that likely would require a re-worked contract — and there has been no move yet to allow Murray to explore one. While the Eagles mull how to move forward, that could be the next step.

Meanwhile, Murray sits in flux, unsure how to proceed in a situation that turned from a dream into a nightmare in the span of one season.