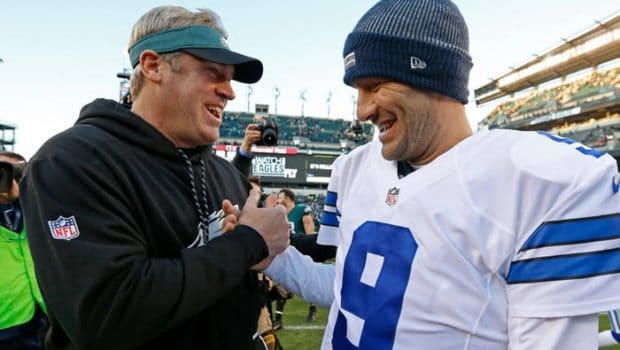 Eagles’ big boss Howie Roseman has a decision to make.

Will backup quarterback Nick Foles lead them for the rest of the season? Or will they seek outside help?

Carson Wentz carried them to 11-2 and the NFC title. But Wentz tore his left ACL midway through the Eagles’ 43-35 win over the Rams on Sunday night. He’s out for the season.

ESPN’s Dianna Russini tweeted Monday afternoon that the Eagles should consider Tony Romo (above with Birds coach Doug Pederson), who’s excelling as a CBS broadcaster in his first season away from the Cowboys.

“How many weeks of watching Nick Foles before Philly realizes they should convince the prematurely retired @tonyromo to come out of the booth” Russini tweeted. “The veteran knows the NFC, the Eagels have a great running game and defense, and here’s Romo chance to win a Super Bowl.”

It’s not the first quarterback that triggered a “get Tony Romo” frenzy. Packers quarterback Aaron Rodgers broke his collarbone the week after winning a close game over the Cowboys at AT&T Stadium in October.Mumbles spread then too about a return to his native Wisconsin.

Would Romo go to his longtime NFC East rival? Packers legend Brett Favre committed that crime when he signed with NFC North foe Minnesota after 16 seasons with Green Bay – including a Super Bowl title and a second trip to the big game.

NBC Philly reporter John Clark said fans considered it on the way back from the Eagles’ trip to Los Angeles. Some felt Foles could manage the game, others recommended the team “sign Colin Kaepernick” and still more put out the ultimate controversial suggestion that they’d “rather have Tony Romo.”