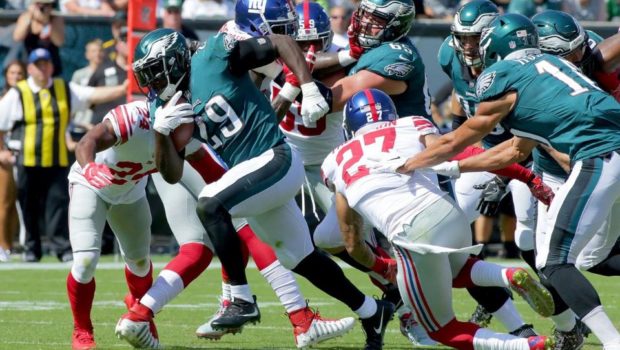 This is the 12th meeting between the teams with the Chargers holding a 7-4 edge. The most recent matchup in 2013 saw Philip Rivers pass for 419 yards and three touchdowns in the Chargers’ 33-30 win in Philly. The Eagles are making their first visit to Southern California since 2009 and went 1-5 in games played in San Diego — losing the last five. In fact, this is just the Birds’ third trip out west to face the Chargers since 1989.

Eagles’ second-year quarterback Carson Wentz passed for just 176 yards in last week’s victory over the New York Giants after topping 300 in each of the first two games. Wentz could use improved protection from his offensive line as he has been sacked 11 times and Chargers’ sack master Melvin Ingram (5.5 sacks) is salivating about opportunities to pad that total.

Perhaps unleashing LeGarrette Blount (above, 113 yards) would be ideal with Los Angeles ranking next-to-last in rushing defense (146.7 yards per game). The Eagles may possess the late-game magic the Chargers lack as they won their last game on Jake Elliott’s franchise-record 61-yard field goal with no time remaining.

Ingram stands second in the NFL with his 5.5 sacks and he appears intent in earning his new four-year, $64 million deal in the first season. He had three sacks against the Chiefs and his speed on the edge makes it hard for tackles to deal with him one-on-one. Bosa has two sacks and never gives up on a rush even when he looks like he’s been stopped. Peters hasn’t allowed a sack yet this season and is one of the best left tackles in the league. Johnson is pretty stout himself on the other side of the line.

The Birds rolled up a season-best 193 yards against the Giants and there is opportunity to do more damage with Los Angeles having its struggles halting opposing rushers. Blount had 67 yards against New York while Smallwood stunningly racked up 71 on 12 carries after entering the contest with eight yards on seven carries. The season-ending injuries to Darren Sproles (knee, arm) ensures Smallwood will have a bigger role moving forward. Los Angeles allowed 172 rushing yards to Kansas City rookie sensation Kareem Hunt and the high number of downfield tackles help explain linebacker Jatavis Brown’s NFL-leading 36 tackles.

Eagles tight end Zach Ertz is off to a torrid start with 21 receptions for 245 yards. His reception total is tied for third in the NFL and his yardage ranks 10th. Antonio Gates of the Chargers has spent most of his career as the best tight end on the field but there is no question Ertz is the best at the position inside the StubHub Center this Sunday. Ertz has caught 75 or more passes each of the two past two seasons and looks on his way to topping that output this season. “I’m just trying to go out there and make plays when the ball is in the air,” Ertz said. “I think if the ball is near me I’m going to catch it. I think I can get open against most, a lot of people in this league, I think I’ve proven that throughout my career.” One area the former Stanford standout needs to improve at is finding the end zone. He has never caught more than four touchdown passes in a season and has 14 in his career.

Eagles WR Alshon Jeffery had 10 receptions for 152 yards against the Chargers in 2015 as a member of the Chicago Bears. WR Torrey Smith has 19 catches for 286 yards and three touchdowns in three games against the Chargers. CB Jalen Mills recorded a career-best 12 tackles last Sunday versus the Giants. K Jake Elliott’s 61-yard field goal was the third-longest game-winner in NFL history. … Chargers QB Philip Rivers has five touchdown passes against zero interceptions in two meetings against the Eagles. TE Antonio Gates registered eight catches for 124 yards in the 2013 meeting against Eagles. DE Joey Bosa has 19 tackles for loss since entering the NFL in 2016, tied for fifth most during the span. LB Jatavis Brown has 10 or more tackles in four of his last five contests.