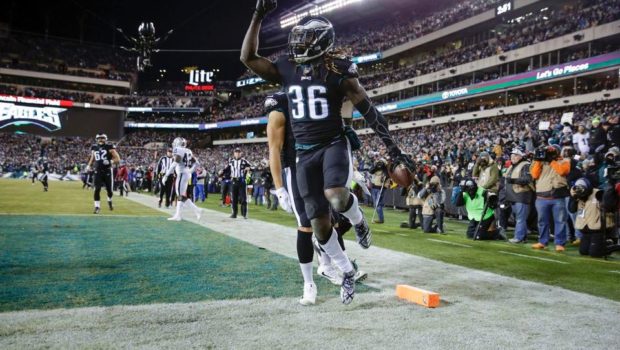 Quarterback Nick Foles assumed most of the blame for the Eagles’ offensive woes after the 19-10 win over the Raiders on Monday night.

But the real question is:

How do the Birds jump-start their once-productive offense and avoid a one-and-done in the playoffs?

On their second offensive drive of the night, the Eagles marched methodically down the field, leaning heavily on the ground before Foles found October trade acquisition Jay Ajayi (above) for a screen-pass score. Things clicked. Ajayi and bulldozing complement LeGarrette Blount combined for seven carries, one of which was called back on a penalty, on that first scoring series. So, officially, on that drive: Six carries, 31 yards (5.1 per carry) for Ajayi and Blount.

The rest of the game? A combined 13 carries for 33 yards.

Almost half of Ajayi and Blount’s shared workload for the entirety of Monday’s game against the Raiders’ porous run defense came in a single, 11-play drive — the only one that resulted in an offensive touchdown for the Eagles on the night. That alone should tell you that just because Foles was off and just because his receivers weren’t on the same page doesn’t mean coach Doug Pederson is not also to blame for what amounted to all but an absolute abandonment of the run game — something that killed the Eagles in Week Two, one of their rare regular-season losses to the Kansas City Chiefs.

Concerning as it may be, it might actually serve as a sign of promise — a wake-up call, of sorts — for Pederson, who has otherwise out-schemed his way to 13 wins despite his team’s rash of injuries along the way, watching the Birds go for more than 100 rushing yards throughout their 10-game win streak this fall.

Because if Foles is anything close to what he was against the Raiders come playoff time, what other choice does Pederson have but to turn back to his other offensive weapons? Blount hasn’t been lighting up the stat sheet in any regard, but that doesn’t even matter as much as continually making Ajayi, the ex-Miami Dolphins Pro Bowler, the focal point of this revamped post-Wentz offense.

Aside from a pair of fumbles, the most recent of which came not as a result of poor ball carrying but aggressive Raiders defense, Ajayi has shown nothing but big-play potential with the rock in his hands. On short notice as an October arrival, the bruising speedster has brought new life to a backfield weighed down by Blount’s short-yardage push, and even up to 70 carries with the Eagles, he’s still averaging almost six yards per tote. Pass protection remains a question, but it might not be as big a question to begin with if the team actually fed Ajayi like a starting running back from start to finish, taking additional pressure off Foles.

In his best stretches as a starter, Foles, like many quarterbacks, has shown that he can manage a game with a complementary rushing attack. It’s up to the Eagles to turn their offense around and give him just that.

0 thoughts on “EAGLES BETTER REVERT TO THEIR ONCE-PRODUCTIVE RUNNING GAME!”