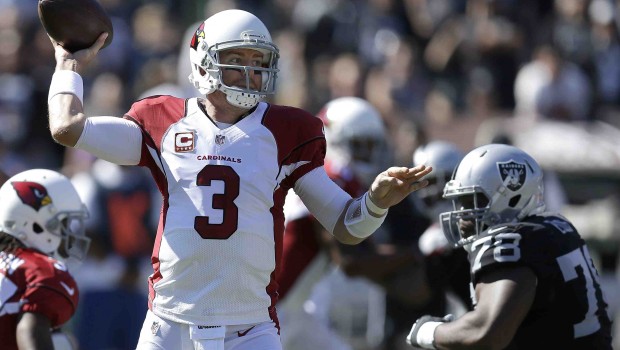 EAGLES BEST NOT LOOK PAST CARDS, THEIR NEXT FOE ON OCT. 26

The Eagles come out of their bye week at 5-1 and with the Cowboys now ahead of them at 6-1 and the Arizona Cardinals, their next opponent on Oct. 26 on the road, now even with them at 5-1.

And this game promises to be as dangerous as any of the Birds’ remaining 10-game schedule.

“I think we have a group of guys that find ways to win,” coach Bruce Arians said, following Sunday’s 24-13 victory over Oakland. “We’re not special. But we have a bunch of guys that are going to play hard for 60 minutes.

“We know we’re not special. The one thing we talked about all week is you never underestimate an opponent, (and) you damn sure don’t overestimate yourself. We haven’t done anything yet except get to 5-1. There’s a lot of football left.”

Still, 5-1? The standings must look like a mirage to long-suffering Cardinals fans. The team has been decimated by injuries, and yet here they are, alone in first place, in control of the toughest division in football.

They do not have internal issues or players fighting one another before big games, as has been reported with the Seahawks. They are not sick of their head coach, as alleged in San Francisco. For the moment, they have something their more talented competitors do not possess.

They have unity. They have spirit. They have won 12 times in their past 15 games, and each victory seems to strengthen their bond and their resolve.

Much of this is a credit to Arians, who is always prepared, always confident, excels at play-calling and makes great adjustments on the fly. Can’t ask for much more from a head coach.

This could’ve been a trap game. The Raiders are much better than their winless record indicates. Near the end of the first half, the hosts rattled the Cardinals with 10 quick points, nearly eclipsing what had been a dominant first-half performance.

The turnaround was so swift that it seemed to rattle the visitors, who weren’t sure whether to run out the clock or try to score on the final possession of the half.

Fortunately, the anxiety was only a temporary condition, and the second half delivered more of what Cards fans have come to expect: big plays under pressure, a calm quarterback fighting through adversity and a defense that held the opponent scoreless in the final 15 minutes.

“This was huge for us,” Cardinals offensive lineman Jared Veldheer said. “Every game gets bigger and bigger.”

While the Cardinals may not be “special” just yet, here’s some more good news: This game might be a turning point for the offense. Michael Floyd re-emerged as a big-time playmaker; Stepfan Taylor turned in the best game of his career; Andre Ellington had 30 touches and was still upright when the gun sounded; Carson Palmer (photo above) engineered a series of third-conversions; and rookie John Brown made a tough catch over the middle to set up the team’s final score.

There were times during the preseason when the Cardinals offense looked dazzling, dynamic and nearly unstoppable. That hasn’t translated to the regular season. It also means the Cardinals still have significant room for growth, the kind we witnessed in the second half.

“Outstanding job by everyone that put on a hat today,” Arians said.

When it was over, the Cardinals reveled in their lofty standing. Music pumped through the cramped locker room. Even the injured Darnell Dockett caused a stir, holding a sign to vanquished Raiders fans that read, “Worst Team in the NFL: 0-6.”

“There was a fan that was messing with me all day,” Dockett said. “I couldn’t wait. I just had to make sure we won the game first.”

Given the Cardinals’ history, I’m not sure it’s a good idea to tempt fate or to anger the football gods. I’m guessing Arians won’t appreciate the gesture, either. But these are giddy times for a franchise that has suddenly become among the best in football.

Maybe they don’t always look the part. Maybe it’s hard for some fan bases to see how the Cardinals have taken flight in recent years. At one point on Sunday, the scoreboard operators had some fun at our expense, flashing an array of silly insults on the screen (i.e., “the Raiders have a Nation; the Cardinals have a bird gang).”

If they looked closely, they would find these Cardinals very much resemble the great Raiders of old, when “commitment to excellence” was more than just lip service.