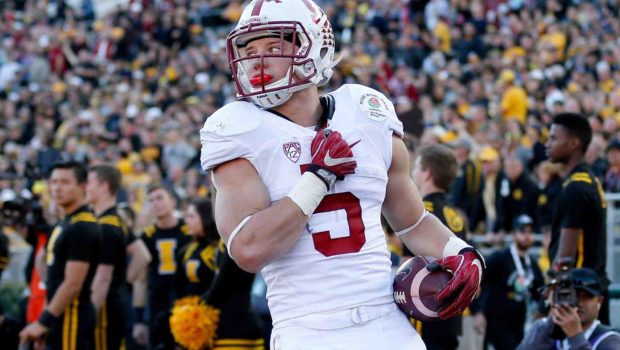 WHY EAGLES ARE THE BEST LANDING SPOT FOR CHRISTIAN MCCAFFREY!

The Eagles are likely to address one of two positions in the first round — running back or cornerback. Those draft values line up well with the team’s upper-half selection.

If the Eagles go offensive backfield, it will be a tough decision between Christian McCaffrey and Dalvin Cook.

So far the theme of the offseason has been giving quarterback Carson Wentz playmaker upgrades for Year 2, led by the signing of wide receivers Alshon Jeffery and Torrey Smith. McCaffrey offers the right combination of tough running, versatility and explosiveness for Doug Pederson’s West Coast-tinged scheme.

Drafting McCaffrey would allow the Eagles to move on from Ryan Mathews. Darren Sproles has defied his age as a scatback, but he’s slowed down a bit in the punt return game, and the Eagles could use a new gamebreaker on kickoffs.

McCaffrey got snubbed for the Heisman Trophy after being one of college football’s most dynamic players. The Stanford running back prospect is getting his revenge with his rapidly rising stock for the 2017 NFL Draft.

Once thought to be the consensus No. 3 back in the class, McCaffrey has gained ground on LSU’s Leonard Fournette in mock drafts, now being taken ahead of Florida State’s Cook in many of them. That has taken McCaffrey from fringe first-rounder to a surefire top 32 overall pick.

Although that means his perfect NFL team won’t be able to draft him — the Patriots no longer have a first-round pick — there are still several excellent fits for his services.