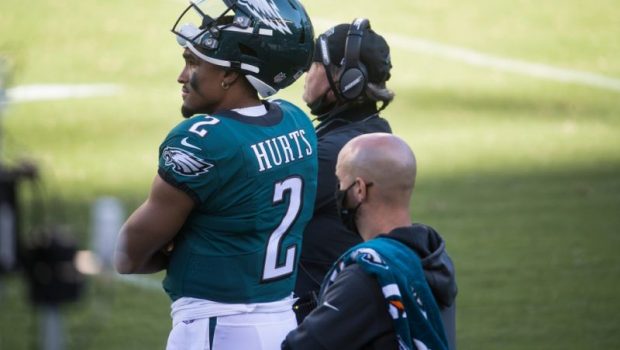 EAGLES BENCHING QB WENTZ FOR HURTS: HERE’S HOW IT MAY HAPPEN!

Pulling Carson Wentz for rook Jalen Hurts would confirm an entirely new QB controversy and open a door the Eagles might never be able to fully close.

But if you’re about to enter Week 7 winless after three straight playoff appearances, that QB controversy will have already manifested itself. In other words, replacing Wentz with Hurts might open a can of worms, but an 0-5-1 start means the worms have already spilled out. And if the Eagles’ intention is to remain competitive until the very end, capitalizing on a bad division and doing whatever they can to restore Wentz in the process, then their best bet would be to insert Hurts to finish that Baltimore game, simultaneously relieving Wentz of pressure and scaring him straight.

The next step, of course, would be reinserting Wentz as starter for Week 7 against the Giants, just four days later. (You wouldn’t tell Wentz this right when he’s benched, obviously.) Then, ideally, you’d be giving No. 11 a clean shot to rebound and rebuild confidence against a division rival on a short week, with another NFC East game (vs. Cowboys) and the Week 9 bye right around the corner.

There’s historical precedent for this kind of “motivational benching” in Philly, and the most recent example is eerily similar:

In 2008, Donovan McNabb had just struggled in — get this — an Eagles tie against the Bengals, and the following week, after throwing two picks against the Ravens, coach Andy Reid benched him at halftime for Kevin Kolb, a second-round draft pick the prior year. There are some differences: McNabb was in his 10th year at the time, whereas Wentz is only in his fifth; and the 2008 Eagles were 5-4-1 at the time. But the surprise change worked: After some awkwardness between McNabb and Reid, the two reunited four days later for a Thursday night game, finished the year 4-1 and advanced all the way to the NFC Championship: