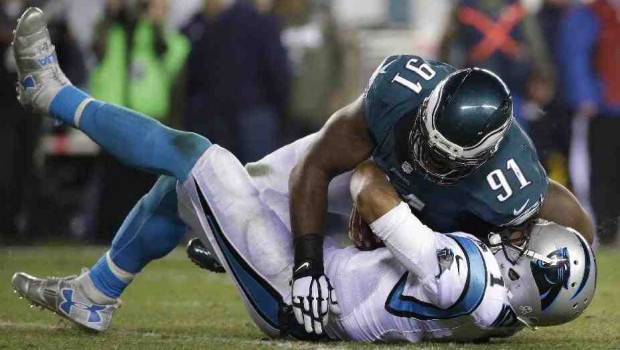 The Eagles’ beatdown of the Carolina Panthers last night was so obvious that even the normally softball Carolina media couldn’t ignore the breadth and depth of the defeat.

Here’s how Joseph Person of CarolinaObserver.com described it:

The Carolina Panthers coughed up the ball on two of their first three offensive plays Monday night … and somehow things managed to get worse from there.

The Panthers have fallen and have shown no signs of getting up.

The Philadelphia Eagles lost their starting quarterback and leading tackler last week against Houston, but they didn’t miss a beat against the reeling Panthers, who haven’t won a game in more than a month.

Quarterback Cam Newton had four of the Panthers’ five turnovers and was outplayed by Eagles backup quarterback Mark Sanchez as Philadelphia rolled to a 45-21 laugher at Lincoln Financial Field.

The Panthers (3-6-1) went 0-4-1 during their five-game stretch against 2013 playoff teams and failed to gain ground on New Orleans in the dreadful NFC South. It’s the Panthers’ longest winless streak since they lost five in a row early in the 2012 season.

Carolina fell to 13-20 in prime-time games, including 0-3 this season following losses to Pittsburgh and New Orleans.

Newton was sacked nine times, matching the most allowed in team history. The Falcons had nine sacks in a 23-20 overtime win against Carolina on Sept. 3, 1995, in the first game in Panthers’ history.

Panthers coach Ron Rivera said he never gave any thought to taking Newton out of the game.

“He’s got to learn and develop,” Rivera said. “He had to get a rhythm going.”

A game after establishing career lows against New Orleans in completions, completion percentage and passer rating, Newton tossed three interceptions during the first half as the Panthers limped into the locker room down 31-7.

The Eagles (7-2) scored touchdowns in all three phases in the first half, getting a 65-yard punt return by former Saint Darren Sproles and a 34-yard interception return by Bradley Fletcher.

The 31 points tied the most allowed by the Panthers in a first half in team history.

Carolina hadn’t played in 11 days, giving starting offensive linemen Byron Bell and Amini Silatolu a chance to get healthy and return to the lineup. But any thought that a healthy line would equate to a solid line was misguided.

A couple of the sacks were coverage sacks and Newton held on to the ball too long on a couple, but the majority were the line’s fault.

Sanchez, making his first start since 2012, completed 20 of 37 passes for 332 yards and two touchdowns. A former No. 5 overall pick who led the league in turnovers during 2011-12, Sanchez did not have a giveaway against the Panthers.

Any chance that Carolina might steal a road win against the NFC East leaders was all but lost during their first two offensive series.

The Panthers gifted the Eagles a 10-0 lead with two turnovers in Philadelphia territory in their first three offensive plays – a fumble by DeAngelo Williams and a Newton interception. Eagles cornerback Cary Williams picked off Newton after rookie wideout Kelvin Benjamin stopped running on a slant route.

The Panthers held the Eagles to a Cody Parkey field goal after Williams’ fumble, but Philadelphia cashed in with a touchdown after Newton threw an interception for the sixth consecutive game.

Sproles ran around the left end untouched for an 8-yard score when defensive end Mario Addison was pancaked by wide receiver Riley Cooper.