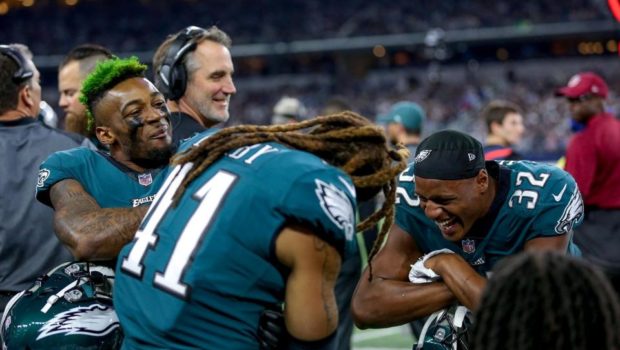 Last Sunday night at AT&T Stadium in front 93,247 fans, the Eagles delivered the knockout punch to their bitter division rivals, the Dallas Cowboys, 37-9.

The cherry on top was that the Birds are currently lapping the NFC East field.

And the whole NFL world took notice that the Eagles mean business and are taking no prisoners as they notched their 8th straight win!

After a lackluster first half, seemingly needing to knock the rust off after a two-week layoff, the Birds, who were down 9-7, came out with a vengeance shutting out the Cowboys while putting 30 points on the scoreboard.

The beating got so bad, new RB Jay Ajayi claimed he saw the Boys giving up during the game, accepting the beat down the Eagles were delivering, with no let up!

It’s your day when kicker Jake Elliott gets knocked woozy on the opening kick and the Birds didn’t miss a beat. After kicking the PAT on the first TD, the Eagles went for 2 on the next 4 touchdowns, succeeding on 3 of 4, scoring 6 points, instead of the possible 4 if Elliott was kicking the PAT.

The second half was much kinder to Carson Wentz, connecting on two more TD’s to Torrey Smith and Alshon Jeffery, adding to his NFL lead of 25 TD’s, also a franchise record for the first 10 games of the season!

Next up the Chicago Bears will visit the Linc next Sunday, November 26th, 1pm/Fox.