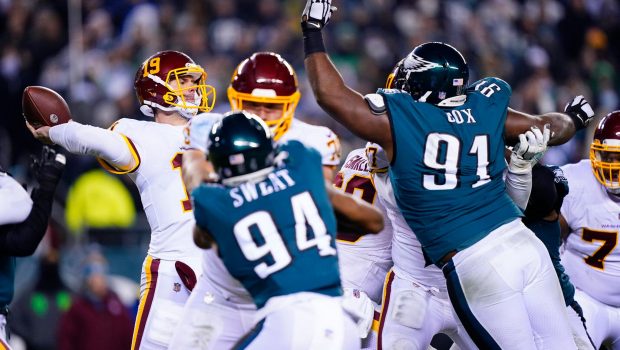 It’s Wednesday morning, and the Eagles are preparing for their flexed season finale against the Cowboys Saturday night at the Linc.

The NFL flex this game from Sunday because they needed a high-profile attraction for Saturday night, and the Cowboys are the NFL’s most recognizable team.

The Cowboys (11-5) will face the Eagles (9-7), who have already clinched a wild-card berth and may be missing many of their starters due to a coronavirus outbreak.

Also, this game will not actually determine the Cowboys’ final seeding.

This is the downside of a 17-game season, which includes an extra playoff team in the NFC and AFC.

To learn their true fate, viewers will have to tune in for such can’t-miss Sunday action as the 12-4 Tampa Bay Buccaneers’ showdown with the 5-11 Carolina Panthers.2021 N.F.L. Season News and Analysis

Had the season ended in Week 17, the Cincinnati Bengals’ AFC North-clinching 34-31 upset of Kansas City would likely have been moved to prime time and served as a thrilling climax.

The 16-regular-season-game, 12-playoff-team format, which lasted from 1990 through 2020, created a delicate equilibrium that made compelling final weeks possible. Playoff berths were relatively scarce, while first-round byes were precious but reasonably attainable. The best and worst teams sometimes still had little to play for in their season finales, but there were still plenty of games between quality opponents with meaningful stakes in between.

The league upset that equilibrium by adding two wild-card berths and eliminating two first-round byes in 2020, then lengthening the regular season to 17 games this year. Division winners with no chance to claim a first-round bye, like the Cowboys and the Buccaneers, may still be motivated to earn a higher seed so they can face a weaker first-round opponent and perhaps gain an extra home game later in the postseason. But that’s not a very compelling hook for casual viewers.

The extra wild-card berths, meanwhile, turned the second half of the season into an endless round robin of welterweights who neither gained much ground by victory nor fell very far behind in defeat, making the games feel repetitive and insignificant. When every routine December matchup is a potential “playoff preview,” then playoff previews cease to be very interesting.

The latest Covid-19 surge made the end of this NFL’s season feel even longer and less relevant. The Eagles and Raiders climbed past the Browns and Washington by defeating what the New York Times called “their glorified scout teams” in rescheduled December games. Wild-card berths are not necessarily going to the worthiest teams this year.