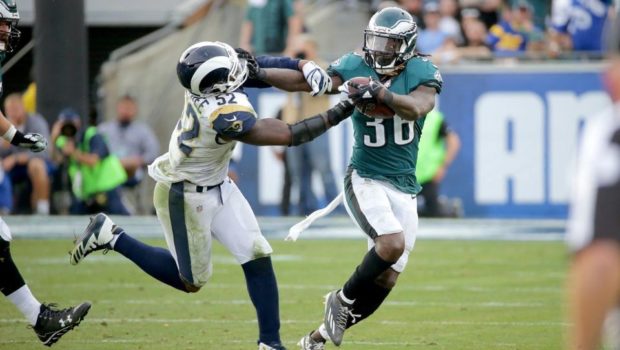 IF EAGLES BEAT GIANTS THEY GET FIRST-ROUND BYE, AND IF VIKES LOSE THE BIRDS GET HOME FIELD!

Even though the Eagles have already clinched the NFC East title, there’s a lot on the line today:

1. x-EAGLES (11-2): NFC East leader. Life after Carson Wentz begins today. But beat the Giants, and Philly secures a first-round bye. Couple that with a Vikings loss, and the Eagles clinch home-field advantage.

2. Minnesota Vikings (10-3): NFC North leader. A victory over the Bengals gives them the division crown.

3. Los Angeles Rams (9-4): NFC West leader. Huge game at Seattle. Earn a season split with the Seahawks, and the Rams are in good shape. Lose, and L.A. could fall out of the playoff field entirely and will certainly lose their hold in first place in the division. Detroit’s win Saturday guarantees the Rams cannot clinch anything in Week 15.

4. New Orleans Saints (9-4): NFC South leader. Can’t afford to overlook the Jets as they try to maintain a razor-thin margin atop the division.

6. Atlanta Falcons (8-5): Wild card No. 2. They don’t have much wiggle room heading into Monday night’s game at Tampa.

0 thoughts on “IF EAGLES BEAT GIANTS THEY GET FIRST-ROUND BYE, AND IF VIKES LOSE THE BIRDS GET HOME FIELD!”