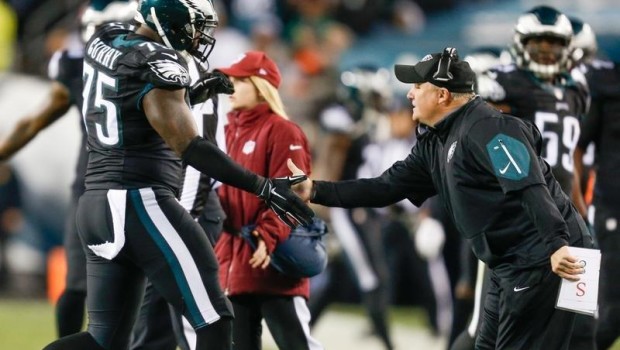 No, I am not going to overstate how well the Eagles defense played last night in the 27-7 beatdown of the New York Giants that tied the Birds for the top spot in NFC East with a 3-3 record.

However, if this version of Billy Davis’ defensive squad hasn’t improved markedly from last season’s bad bunch, it is safe to say the Giants might have won last night’s game at the Linc.

“All the credit goes to them,” Eagles quarterback Sam Bradford said of the Birds’ defense. “It seemed like every time we needed a stop or a big play, they created a lot of turnovers tonight. That always gives us a lot of momentum and always gives us juice.”

Bradford threw for 280 yards with a 32-yard TD pass to Riley Cooper, but had three interceptions to keep New York in the game. The Giants got zero points off the turnovers.

“We were stagnant,” Giants coach Tom Coughlin said. “They did more with their opportunities than we did.”

The Eagles (3-3) have won two straight to move from last place in the NFC East into a tie for first with the Giants (3-3). The teams meet again in Week 17.

Neither team looked sharp in front of a prime-time audience. They combined for seven turnovers and 21 penalties.

The Giants gave the Eagles first downs on a roughing-the-passer penalty and a running-into-the-kicker penalty to keep both of their TD drives going.

Wearing all-black uniforms for the third time in franchise history, the Eagles got off to another slow start.

Manning completed his first 10 passes, including a 13-yard TD pass to Odell Beckham Jr. for a 7-0 lead.

But things went downhill for Manning from there.

The Eagles took a 14-7 lead in the second quarter when Carroll jumped in front of a pass intended for Dwayne Harris and ran it back untouched for his first career TD.

“Terrible read by me, bad decision to make that throw,” Manning said. “I should have gone to my next guys in my progression.”

After Nikita Whitlock ran into punter Donnie Jones to give the Eagles a first down at its 28, Murray took over. He had two runs of 11 yards each and finished off the drive with a 12-yard TD run to give Philadelphia a 24-7 lead in the third quarter.

Murray had his best game since joining the Eagles after a record-breaking season in Dallas. The All-Pro led the NFL in rushing last year and broke Emmitt Smith’s single-season club record, but has struggled in Philly. He entered the game with 130 yards this season.

“We know we have a long way to go,” Murray said.

The Eagles were 1-3 before a 39-17 win over the New Orleans Saints at home last week. They’ll travel to play unbeaten Carolina (5-0) next Sunday night.

The Giants had won three in a row. They’ll host Dallas (2-3) next week.

Bradford had a pair of third-quarter interceptions on poor throws, including one that Landon Collins picked in the end zone.

But Philly’s defense bailed him out.

“We need to improve on offense,” coach Chip Kelly said.

The Giants came out playing Kelly’s style of football, running a no-huddle offense. They moved right down the field and Manning connected with Beckham across the middle for a score.

The Eagles went three-and-out on their first possession and the Giants were driving with a first down at Philadelphia’s 23 when DeMeco Ryans stole the ball from Larry Donnell for an interception.

A roughing-the-passer penalty on Damontre Moore helped the Eagles avoid another three-and-out and Bradford hit Cooper on a deep pass to tie it at 7-7.

The teams traded turnovers midway through the second quarter. Malcolm Jenkins forced Rashad Jennings to fumble and Ryans recovered at the Eagles 38. But Jayron Hosley intercepted Bradford’s deep pass and ran it back to the Giants 42.

Caleb Sturgis hit a 37-yard field goal to give the Eagles a 17-7 lead at halftime. He nailed one from 39 in the fourth quarter.