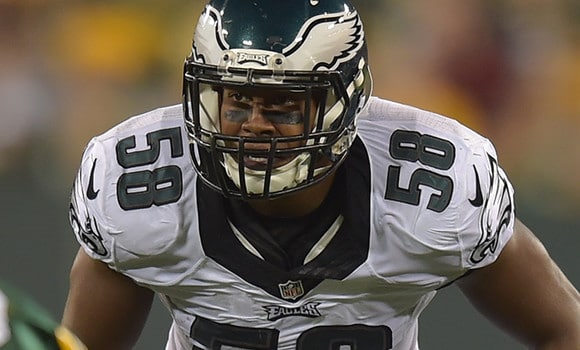 EAGLES BACKERS SUCKED — THEY BETTER NOT AGAINST VIKES!

Eagles linebackers Nigel Bradham and Jordan Hicks (above) were awful against the run last Sunday against the Redskins..

As in, he waves as runners ran by him all day, missing at least two tackles.

The unit couldn’t wrap up at all as 154 of Washington’s 230 rushing yards came after contact.

The linebackers, and the rest of the defense, will try to put their poor performance behind them when they face the Vikings at Lincoln Financial Field.

Minnesota hasn’t run the ball well this season, which bodes well for Birds’ defense. The Vikings are dead last in rushing yards with only 353 through five games.

Minnesota had to place future Hall of Fame running back Adrian Peterson on the injured reserve with a torn meniscus. Even before Peterson’s injury, the Vikings couldn’t move the ball on the ground. Peterson had 31 rushes for 50 yards before he went down with the knee injury.

The Eagles linebackers have an opportunity to rebound against Jerick McKinnon, Matt Asiata and Minnesota’s weak rushing attack.

To defeat the rolling 5-0 Vikings, the Eagles cannot allow 230 rushing yards like they did against the Redskins.