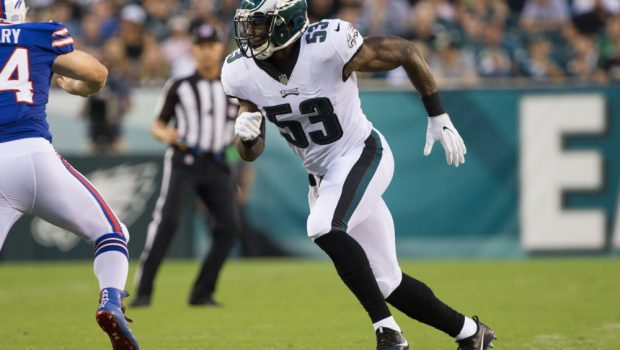 “It took a little bit more out of me,” said Eagles linebacker Nigel Bradham. “I had to make sure I got back to the huddle (after each play), get everything right and communicate. So I couldn’t do as much trash talking as I like. That’s why it’s going back to Jordan. I’m done with that.”

The Eagles had a productive off-season, and no signing or draft pick was as important as re-upping Nigel Bradham, their bad-ass linebacker.

Jordan Hicks is coming off another injury and the Birds knew they would be dispensing with Mychal Kendricks and his big-bucks contract.

So, big boss Howie Roseman made sure Bradham had a deal.

A five-year, $40 million contract extension, with $14 million guaranteed, before he could reach free agency this offseason.

“He’s been the heartbeat of our defense,” said defensive coordinator Jim Schwartz, when he met with reporters this week at OTA. “He’s a guy that plays with a lot of emotion. He’s a guy that, for lack of a better term, talks a lot of trash during the game. Gives us a lot of energy. He played some games last year (where) I think he ran five extra miles just to get to the ball to talk, but that’s what gives him energy, and we feed off that as a defense, also.”

“Talking trash is just one of the things we do,” said Bradham. “As long as I back it up, I’ll be fine.”

He was third on the team in tackles last year with 85, including five tackles for loss. His sack of Falcons quarterback Matt Ryan in the divisional round of the playoffs helped set up a field goal gave the Birds a 12-10 lead.

Two years ago, Bradham was third on the team again with 99 tackles, four more than Hicks had that year.

What Schwartz would like to see Bradham do more is finish plays with interceptions. He got his hands on a few passes last year but couldn’t corral the ball.

“We’ve had a lot of talks about that this offseason,” said Schwartz. “Actually, we haven’t really had them — he’s brought that up and wanting to finish those plays. I probably have a few gray hairs that I might not have if he had sealed some of those pass breakups as interceptions. So I think that’s probably the biggest thing for him.”