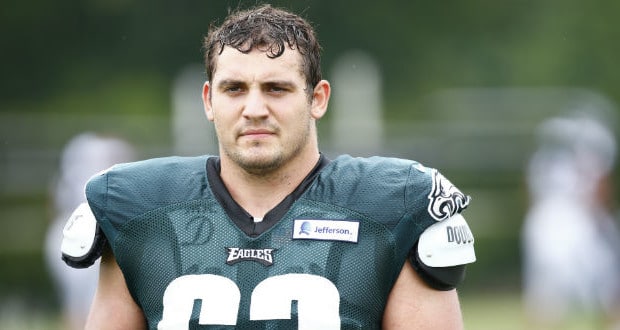 EAGLES BACK-UP CENTER MOLK OUT FOR SEASON WITH BICEP INJURY

The Eagles offensive line didn’t have a great opening night game against the Falcons, and now back-up center David Molk is gone for the season with a torn right bicep.

The injury occurred while Molk was playing special teams, on the field-goal block unit. He has been placed on injured reserve.

A seventh-round pick by the Chargers in 2012, the 26-year-old Molk signed with the Eagles last year and made his first NFL start Week 4 at San Francisco.

Backup Josh Andrews has experience playing center. He served as the backup center as a redshirt freshman at Oregon State before moving to guard the following spring. Andrews spent last season on the Eagles’ practice squad.

The their roster currently stands at 52.