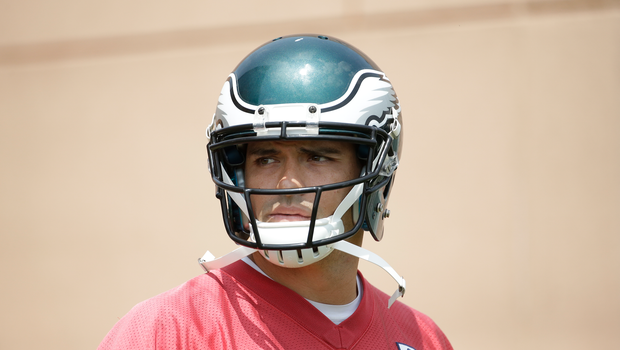 Eagles back quarterback Mark Sanchez (above) sounded like a insecure baby last month when he dissed Tim Tebow by saying he was “just another arm in camp” until starter Sam Bradford rehabbed completely.

Yesterday, after the OTA at the NovaCare complex, Sanchez sounded more like a seasoned diplomat.

“That came off the wrong way. It was not what I intended to say and it took on a life of it’s own,” Sanchez said. “Look, everybody is here for a reason. We are all working hard and trying to make each other better. Coach wanted specific guys here for specific reason, and that is up to coach. We just plug in and play.”

Speaking on Thursday after practice, Sanchez was asked about how he felt to have Tebow back as his teammate.

“That coach has a good plan for everybody here, and everybody is competing as hard as they can and making each other better,” Sanchez said. “At some point, (head coach Chip) Kelly and (top personnel executive) Ed Marynowitz are going to go through and pick the best 53 guys, form a practice squad and we’ll have our team.”

Tebow is considered a long-shot by many to make the team, but has been working for the past two years to improve his throwing motion. Sanchez, however, didn’t want to comment on any improvements he saw from his new teammate.

“I don’t know like to compare coaches or players from where I’ve been before,” Sanchez said, “so I’ll stay away from that.”

Although Sanchez went 4-4 as a starter, he played the toughest stretch of the Eagles’ season. He had arguably the best stretch of football in his career, throwing for 2,418 yards and 11 touchdowns in nine games.

Sanchez’s strong play and knowledge of the offense are reasons why Kelly has said he will compete with Bradford, who is recovering from a torn ACL, for the starting job in training camp.

“Everybody is getting a chance to go with the ‘first team’, or whatever you want to call it,” Sanchez said. “When we get to camp, (Kelly) didn’t have to say anything to persuade me (to come back), he just said I’m going to compete like everybody else.”