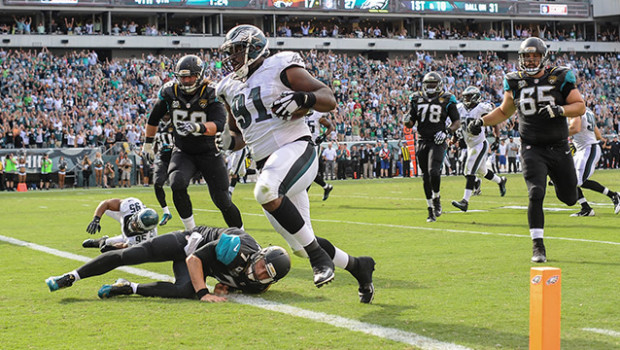 Yesterday’s Eagles’ opener with the Jacksonville Jaguars was not for the faint of heart.

Down 17-0 at the half, QB Nick Foles overcame three turnovers and threw a 68-yard touchdown pass to Jeremy Maclin early in the fourth quarter to give the Eagles their first lead. Fletcher Cox returned a fumble 17 yards for a TD (photo above) to seal the 34-17win.

And, with both the Cowboys and Redskins losing yesterday and the Giants playing the Lions tonight, the Eagles are perched atop the woeful NFC East.

But the Jags couldn’t sustain their success.

“It’s going to be a good lesson for us to take a look at this game and see it is going to be a full 60 minutes that you have to play,” coach Gus Bradley said.

The Eagles scored TDs on their first two possessions in the third quarter to get within 17-14. Cody Parkey hit a 51-yard field goal on his first career attempt in the fourth to tie it at 17-17.

Then Foles made a perfect deep throw to a wide-open Maclin for the longest pass of his career to put the Eagles ahead 24-17.

“We tried that about five times. We finally got it,” Kelly said.

Darren Sproles had a 49-yard TD run in his debut with Philadelphia. Zach Ertz caught a 25-yard TD pass from Foles.

Hurns, a rookie free agent from Miami, became the first player with a pair of touchdown receptions in the first quarter of his NFL debut. He scored on his first two catches.

“There’s a lot of good things that we did. But at the end of the day, we didn’t finish,” Hurns said.

Foles rebounded from an awful first half to finish with 322 yards passing. He had two fumbles and one pick in the first 20 minutes after he had only four turnovers (two fumbles, two INTs) in a breakout season last year that ended with him being offensive MVP of the Pro Bowl.

“When you face adversity, you have to respond,” Foles said. “You can’t get frustrated. We made corrections and kept playing.”

Early on, the Eagles barely resembled the offense that set several team records in 2013. The Jaguars stifled Kelly’s up-tempo attack, limiting the Eagles to only 129 yards in the first half.

Sproles got them going. He made a one-handed catch and turned it into an 8-yard gain right before he burst up the middle for a 49-yard TD run on fourth-and-1. The longest run in Sproles’ nine-year career cut the deficit to 17-7.

“We knew they were getting kind of tired,” Sproles said. “We hurried up on them and they weren’t even set. They left a big hole in the middle of the field and that’s what you want to see as a running back.”

After the Jags went three-and-out, Sproles returned a punt 22 yards to the Jaguars 40. On third-and-5, Foles hit Ertz over the middle for a score to get the Eagles within 17-14.

In the first half, Foles looked nothing like the guy who posted one of the best statistical seasons in history last year. He had 27 touchdown passes and only two interceptions, setting an NFL record for best TD/interception ratio. His passer rating of 119.2 was the third-highest ever.