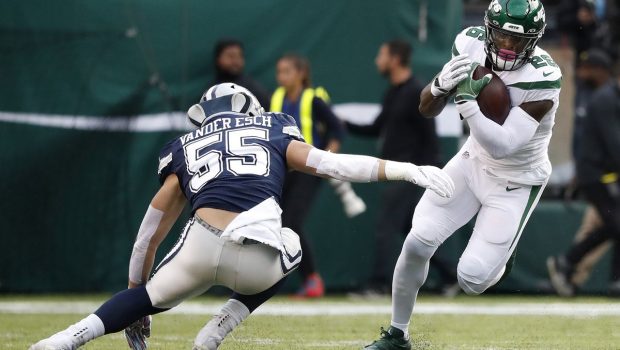 EAGLES AT COWBOYS: 3-3 TEAMS TIED FOR LEAD IN NFC LEAST!

Just three weeks ago, the Dallas Cowboys were undefeated and competitors atop the NFC.

After yesterday’s 24-22 loss to the previously winless New York Jets, they’re none of those things. No, now they’re .500 and barely leaders in their own division — tied with the Eagles at 3-3.

For owner Jerry Jones, Dallas’ quick fall from conference darlings to the middle of the pack is upsetting, but not necessarily a sign of things to come, especially with a divisional clash with the Eagles coming next week.

“I’ll say this. I think the way that we are by virtue of what you saw tonight, the Jets stepping up here and beating us like that,” Jones told reporters when asked the upcoming Eagles game. “I think it’s all about where you end up in your division. I think the competition against each other and the competition within the division, I think that’s where it all is.

“Now, ultimately, if you’re one of the really top teams, which we’re not, we are not… I hope that someday this season we could be one of the top teams. We certainly were not tonight. I hope that we can do better than just win our division, although I’ll take that right now in this circumstance. But I hope that we can get out there and get a little special positioning in the playoffs.”

Losers of three straight to the Saints, Packers and Jets, Dallas currently sits at 3-3, tied with Philadelphia atop the NFC East; the Cowboys own the tiebreaker due to a superior division record. Had the Cowboys handled the Jets, they would’ve separated from Philly, who were throttled by the Vikings earlier Sunday. Alas, the two are locked at 3-3, the winner of next week’s Sunday night matchup in Big D set to take the lead in a very winnable division.

But Jones says the game shouldn’t be built up more than any other.

“This was a big game for us. Every one in your division is big, but this was a big game,” Jones said. “We could’ve been 4-2 and it didn’t have anything to do with… I don’t care if they’re 5-0 and 1-4. We suffered another loss because of it.

The Cowboys have been punched square in the face over the last three weeks after KO’ing weak opponents over their first three rounds. Dallas could go into next week without its starting tackles (Tyron Smith, La’el Collins) and two of its top receivers (Amari Cooper, Randall Cobb).

But the season is not over, not in the slightest. For Jerry and Co., it’s important to have perspective. On Sunday, his 77th birthday, Jones told reporters he’s had better celebrations over the course of his life, but remained sunny.

“I’m really glad to have this birthday,” Jones joked. “You won’t find me kicking it in the street behind the bus.”

The same can be said for his Cowboys. They’re not dead yet.