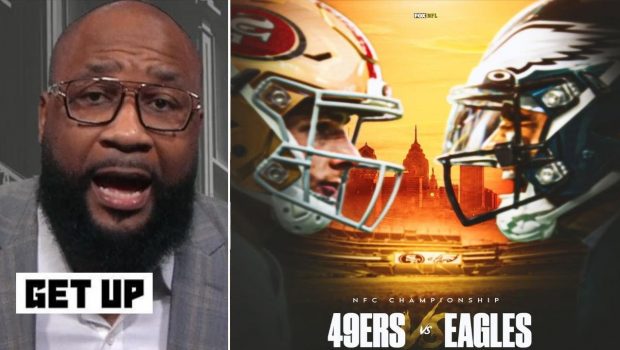 EAGLES ARE MUCH BETTER THAN NINERS, MARCUS SPEARS SAYS!

There is a decided anti-Philly bias among the lapdog national media types.

For documentation, just YouTube any national media blowhard expounding about how the Giants were going to handle the Eagles last Saturday night!

And dumbass Chris Simms is tripling down on his judgment that he would take Daniel Jones over Jalen Hurts at QB.

He’s become one of ESPN’s sharper voices in NFL analysis and he’s been extremely high on the Eagles all year long.

On Tuesday morning Spears was asked for his updated thoughts on the Eagles as they’re currently constructed, and he didn’t hide his love for what Howie Roseman and Nick Sirianni have created:

“I’m telling you right now: last Sunday, when I watched San Francisco and Dallas, I would’ve thought that San Francisco was the team that could go and beat Philly.

“But Philly is a much better team than the San Francisco 49ers. And look, that don’t mean that [the Eagles are] gonna win the game. We all know that.

“But when you look at how Jalen Hurts operated – and remember, it’s not just the Giants, it’s 13 wins on the season by the way. This ain’t just a one-game litmus test. They are damn near impossible to defend.

“And like I was saying about Dallas, they have people everywhere. Like, who are you gonna guard on this offense?

“They run the ball well, Jalen uses his legs well. You’ve got A.J. Brown outside who we know is a top five receiver in this league. DeVonta Smith, when you want to go over the top of A.J. Brown. Dallas Goedert in the middle of the field.