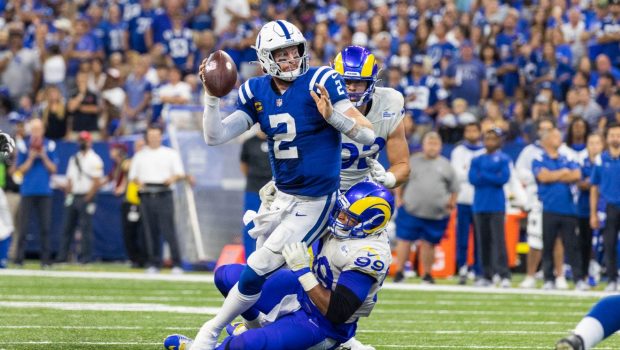 EAGLES ARE HOPING CARSON WENTZ STAYS HEALTHY SO THEY GET A 1!

The Eagles traded Carson Wentz to the Indianapolis Colts for the No. 84 overall pick in the 2021 NFL Draft, plus a conditional draft pick in the 2022 draft.

The pick becomes a first-rounder if Wentz plays 75% of the team’s snaps and is a second-rounder otherwise.

The idea was that by reuniting with his former offensive coordinator, Frank Reich, and playing behind a stronger offensive line than the one that contributed to his disastrous 2020 season, Wentz would be able to recapture the form he had earlier in his career — before injuries started to derail his progress. Six weeks into the season, and with the Colts set to play the San Francisco 49ers on “Sunday Night Football” this weekend, it’s safe to say that the results have been mixed for both teams.

Wentz has largely been … fine for the Colts, overall. While much of his production was concentrated in two games, he has, essentially, given the Colts league-average quarterback play. At the moment, Wentz ranks 17th in the NFL in QBR, 17th in Football Outsiders’ DVOA, and 18th in TruMedia’s EPA per play. It doesn’t get much more average than that.

He was excellent in completing 49 of 67 (73.1%) passes for 630 yards (9.4 per attempt), and four touchdowns against the Dolphins and Ravens in Weeks 4 and 5, good for a 122.1 passer rating. But he is otherwise 79 of 126 (62.7%) for 915 yards (7.3 per attempt), five touchdowns, and one interception, which seems quite good but actually produces a 94.5 passer rating that sits just below the league average of 95.2. He’s basically gotten exactly what has been schemed up for him and nothing more or less, with a 0.9% completion percentage over expectation that ranks 14th in the league, per NFL.com’s NextGen Stats.