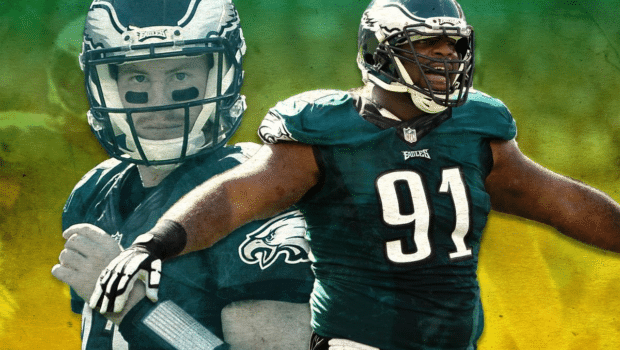 EAGLES ARE GIVING PHILLY SOMETHING TO PROUD OF!

After their 34–3 shellacking of the Steelers on Sunday, the Eagles have become one of the NFL’s elite teams.

Most weeks, Steelers quarterback Ben Roethlisberger is capable of unleashing a godly firestorm on defenses. We’re talking scorched earth. Against first-year Philly coordinator Jim Schwartz’s defense, though, he looked like a kid with a suction-cup bow and arrow. Antonio Brown got his (because that’s what he does) to the tune of 12 catches for 140 yards, but Roethlisberger finished just 12-of-26 for 117 yards on passes to the rest of his receivers. He was fortunate to throw only one interception.

Aside from a requisite bomb to Sammie Coates, a 41-yarder on a third-and-4 in the second quarter, the Steelers had nothing working down the field all game. (Markus Wheaton could have helped, but a first-quarter toss to the end zone hit him in the chest and fell incomplete.) Schwartz’s unit played a combination of zone and man coverage that kept Pittsburgh guessing at the line of scrimmage, and by taking away Roethlisberger’s instant options, it forced him to hold the ball. That’s when the front four took over.

Among 37 qualified quarterbacks in the 2015 season, Roethlisberger finished 36th in pressure rate. On Sunday, he was under siege. Philly’s final numbers — four sacks and eight QB hits — don’t come close to conveying how menacing its pass rush truly was. Fletcher Cox and Brandon Graham tormented the right side of the Steelers offensive line. Roethlisberger was chased quickly from his spot all game, and because the Eagles were able to consistently generate pressure rushing only four, a flooded defensive backfield gave the QB fewer opportunities to improvise. All-Pro right guard David DeCastro and right tackle Marcus Gilbert were flagged for three combined holding penalties; with Philly’s secondary smothering the Steelers receivers, the Eagles were able to decline them all.

This version of the Eagles defense was always possible under Schwartz. Cox and Graham are built for his version of the 4–3, and the team’s ability to toss guys like Connor Barwin and Vinny Curry into the mix gives it a pass rush that rivals any in the league. That group looked dominant in Week 3. So did the Eagles’ big boys on the other side of the ball.

A depleted Steelers linebacking corps (Lawrence Timmons was taken to the hospital with a shin injury; Ryan Shazier was hobbled with a bad knee) made things easier on Pederson’s group, but Philly would have looked great regardless of who was playing on defense. After handing Pittsburgh its worst loss since 1989, there is no longer a Yeah, but attached to what the Eagles have done. Based on what we’ve seen over the past three weeks, Philly’s rookie head coach and quarterback are better than anyone could have dreamed, and this team has emerged as the clear favorite in the NFC East. Pederson and Wentz will be treated like Philly royalty this week.

At this point, they should be.